Mike and Dave Need Wedding Dates starts out giddy with a bouncy firecracker of a credits sequence. Please take that literally as the credits involve a trampoline, fireworks, and two gleeful bros Mike Stangle (Adam Devine) and Dave Stangle (Zac Efron) in mid air. Their joyful abandon is short-lived. A scene or two later we’re at an intervention with their parents (Stephen Root & Stephanie Faracy) in which we see these same high-flying images again from a less zhushed-up perspective in home wedding videos. The inseparable brothers, always stag at weddings, egg each other on until disaster strikes. Every time. Property destruction and ambulance calls follow.

The first few scenes are funny economonical storytelling to set up the movie’s easily marketable ultimatum: No more screw ups — Mike and Dave must bring nice girls to their sister Jeanie’s (Sugar Lyn Beard) destination wedding in Hawaii so that they won’t get each other into trouble!

They do as they’re told. The end (No? Oh, right there’s a movie here.) But trouble still finds them… 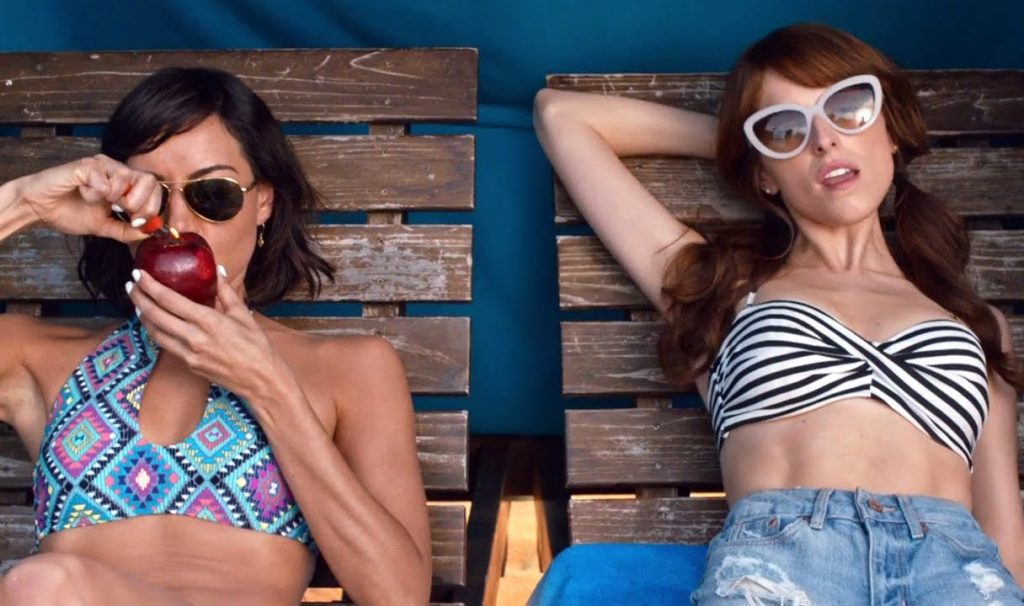 Trouble goes by the names of “Alice” (Anna Kendrick) and “Tatiana” (Aubrey Plaza), two boozy unhinged girls who masquerade as nice ones to land that free trip to Hawaii. This fun house mirror, Mike and Dave’s girls even more irresponsible nightmares, is fun for a while as Kendrick and Plaza run wild over the movie. The actresses temporarily reduce the boys to the boring responsible ones for the first time in their lives. Kendrick is particularly funny in her inability to spin simple lies, always swinging towards nonsensical whoppers.

You can predict that chaos will hit in Hawaii it not any of the truly outlandish ways in which it does. No spoilers but for what you surely know: Naturally Alice and Tatiana’s true personalities emerge, Mike and Dave revert to their frat boy recklessness, and a few new players complicate the festivities. That includes Cousin Terry (Alice Wetterlund), a rival to Mike who will stop at nothing to land Tatiana for herself. (Predatory queers are suddenly in again at the movies — see also The Neon Demon — who signed off on this?!?)

At its best Mike and Dave… is the kind of movie where you can laugh along with its stars (who are obviously having fun) as they mug for the camera. At its worst its a genuine mess with overkill in both plotting and acting. Adam Devine is the worst offender in the over-acting department. He goes straight from mildly funny to flop-sweat manic desperation in a terrible scene in which he imagines his parents “pushing the pop” -a sexual euphemism for… eh, never mind.

Mike and Dave… has a lot of trouble with the dismount, too, as so many sociopathic comedies do when they try to conjur genuine romance or personal evolution from thin air for the finale. Sugar Lyn Beard’s squeaky little girl voice and sweetness as the sister and Anna Kendrick’s lost girl vibe help the movie more than you’d expect, though, when it suddenly aims for FEELINGS.

Every once in a while there’s a really good laugh but, like its title characters, it perpetually pushes too far, never quitting while it’s ahead.  You know you’re in trouble when you’re watching an outrageous comedy and the most relatable characters are the ones wearing permanent stank face off to the side. That would be Mr and Mrs Stangle, who are footing the bill. They look nervous and horrified throughout the movie and, finally, utterly relieved when the comedy wraps up sweetly. Such comedies always do, no matter how inevitable broken bones and irreparable psychological damage once felt.