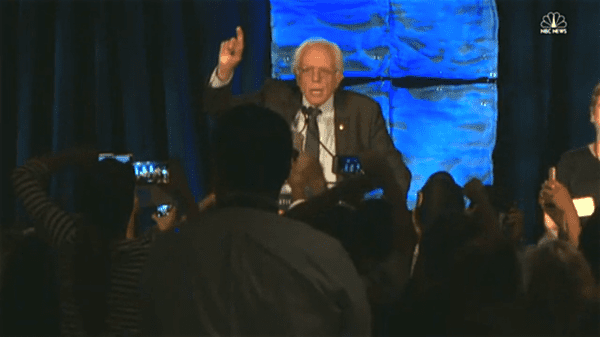 Bernie Sanders on Tuesday made a surprise appearance at the DNC’s California delegation and scolded supporters who booed his call to unite behind Hillary Clinton.

It was the California delegation who was responsible for much of the booing and raucous behavior in the Wells Fargo Arena Monday night.

Sanders himself was booed during his primetime speech and also during an appearance he made before supporters earlier in the day on Monday.

Attempting to rally his supporters behind Clinton, Sanders told the California delegation that they must elect Hillary Clinton as the next President of the United States. When he was again booed, Sanders responded, “It is easy to boo, but it’s harder to look your kids in the face who would be living under a Donald Trump presidency.” He added,

“Donald Trump is the worst candidate for president in the modern history of this country. This a man not only whose policies are bad, we are used to Republicans having bad policies—nothing new there. Nothing new that he thinks that climate change is a hoax. Nothing new that he doesn’t want to raise the minimum wage. That’s nothing new. What is new is that this man is a demagogue who does not believe in the constitution of the United States. That is dangerous stuff.”

Part of the reason why so many Sanders delegates have been so unruly at the DNC thus far may have to do with who those delegates are. According to Heat Street, “no sane Democrats” wanted to be delegates for Sanders for fear of ending up on the Clintons’ so-called ‘revenge list.’

That meant that the delegates who were chosen were not those inclined to toe the party line but rather those ready and willing to disrupt and fight to the bitter end for Sanders.