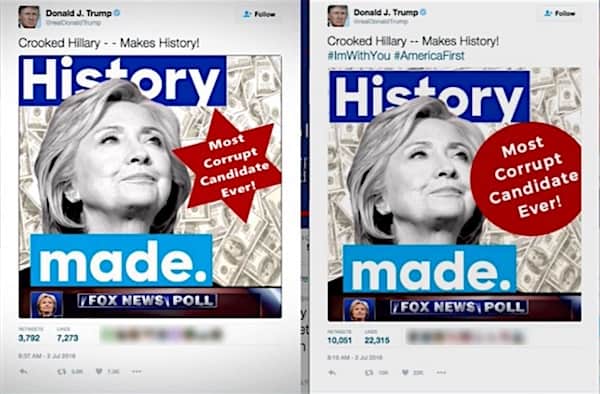 On Saturday, Donald Trump’s tweeted a photo of Hillary Clinton with a Star of David atop a pile of cash with the caption “Most Corrupt Candidate Ever. The tweet was changed out for the image on the right after Trump came under heavy criticism for being anti-Semitic.

The criticism caused Trump to release a statement and tweet in his defense:

“These false attacks by Hillary Clinton trying to link the Star of David with a basic star, often used by sheriffs who deal with criminals and criminal behavior, showing an inscription that says ‘Crooked Hillary is the most corrupt candidate ever’ with anti-Semitism is ridiculous.”

The image was reportedly had appeared on an anti-Semitic white supremacist message board but Trump’s social media director Daniel Scavino said it was lifted from an anti-Hillary Twitter user, @FishboneHead1, who tweets many images, according to Mic, which thinks the lack of attribution is odd considering the campaign always shows its Twitter sources:

In this particular instance, not only does the Trump account fail to attribute the @FishboneHead1 account — or mention any other Twitter account, for that matter — but whoever superimposed the “Fox News Poll” banner over the lower-left corner of the image completely obscured @FishboneHead1’s watermark, thereby further obfuscating the origin of the image.

If, as Scavino claims, Trump’s team really did find the controversial meme from Twitter — and not from /pol/, or another digital repository for racist, xenophobic and violent imagery like it — it is unclear why the Trump campaign would choose this particular instance not to attribute the account from which they found it, rupturing from their longstanding attribution practice just when the campaign would seem to need it most.

On CNN’s New Day Tuesday, former Trump campaign manager Corey Lewandowski went to bat for Trump and Scavino while Christine Quinn tried to shut him down, arguing that the explanation “stretches credibility.”