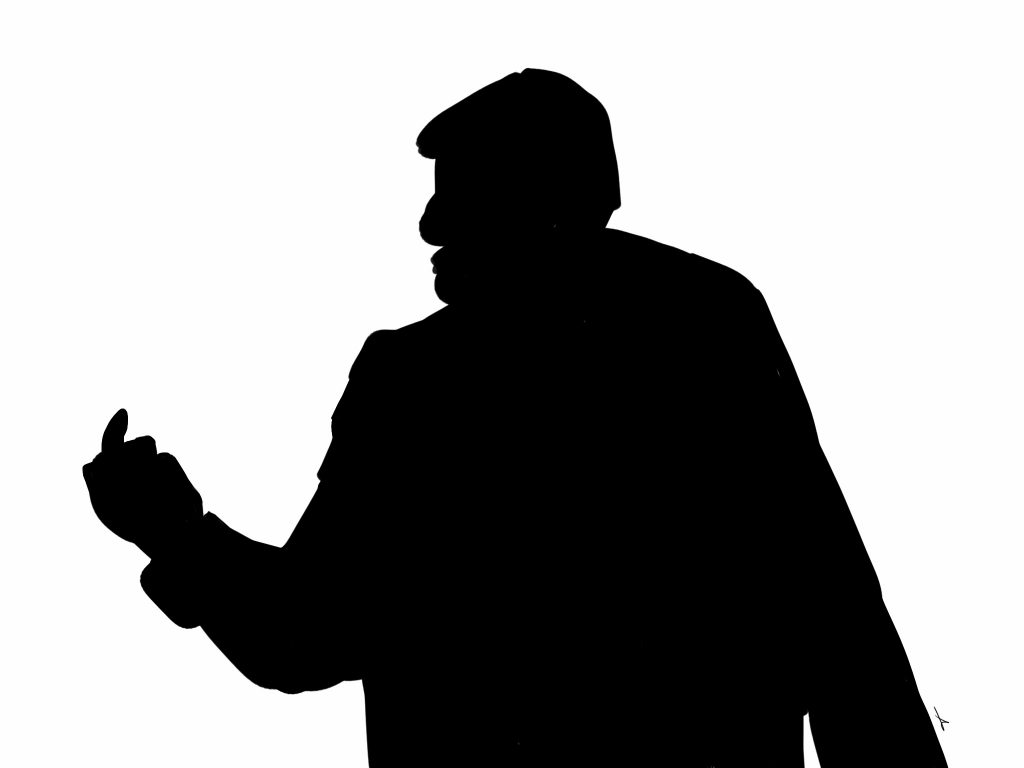 Trump accepted his party’s nomination last night— but it was as if he were never there.

Even his children, who resemble nothing so much as Stockholm Syndrome victims, paled in comparison to the real star: That Damned Woman. I mean, Hillary.

Governor Chris Christie led a dyspeptic GOP crowd in a chant of “LOCK HER UP!” as he goose-stepped his way through a mock trial of Clinton’s crimes against humanity— pretty nervy, considering Christie’s Bridgegate criminal exposé is far from over.

Donald himself has been sued by more Americans, over fraud and unpaid bills, that perhaps any man in the world and certainly any candidate— 1300+ cases since 2000.

It’s is a grisly bit of sexism to consider, but GOP revanchists have a habit of wishing death upon their male enemies— while for women, they want humiliated prisoners, locked down. You see this in their fascination with restricted birth control, forced-birth, purity ball echo chambers.

Tiffany is 22. Donnie Jr. is 38. But Tiff seemed closer to thumb-sucking as she unwittingly described her Great Father’s neglect of her entire childhood.

One time— like this one time at Trump Camp, when a close friend of hers died?— he phoned her.

What distinguishes Tiffany from Donnie Junior, as in all Trump Patriarchal spectacles, is that the female figures are infantilized— barely crawling out of their eggs— while the male figures in the family are full-grown chain-rattlers.

The Plagiarism Count for GOP Primetime: 2 For 2

Last night, Donnie Jr. hired a speechwriter who recycled some hack piece the same man had published in The New Conservative a few months ago. Weak tea, sir.

The pressure is now ON for Daddy himself to plagiarize something REALLY epic. Nixon’s Checkers? Churchill’s “We Shall Fight on the Beaches”? “Hamilton”?

Who ISN’T On the Podium

Interesting to consider that while the GOP specializes in locating lunatic apologists: Clarence Thomas Wanna-Be’s, “Muslims for Trump,” and other miscellaneous shonda for the goyim— they have boxed themselves into a closet when it comes to Trumptastic Homosexuals. After all, the last homocon in the building has just been permanently expelled from Twitter.

“Let me tell you something about Saul Alinsky,” Carson bellowed at the crowd, who seriously did not give a crap.

“He wrote a book called Rules for Radicals. On the dedication page, it acknowledges Lucifer, the original radical who gained his own kingdom. —Are we willing to elect someone as President who has as their role model someone who acknowledges Lucifer?”

But what of our exceptional man of cloth? Harrington is a man whose career is flush in crushing The Child Victim’s Act from passing the New York state legislature, proclaiming on Holy Week: “There is no one doing more to protect children than the Catholic Church today.”

A pox on both their houses.

Some said Trump Wineries took the Gold. After all, wine critics say: “I actively dislike this wine. You know when you walk through the department store and they’re spraying perfume and you accidentally walk through it?”

But for sheer D-List Gas, I’m crowning Mystery Meat Presenter Kimberlin Brown, who closed out the evening with this:

“Hi! Many of you know me from one of your favorite soap operas, The Young and the Restless... I’m now an avocado farmer… yay, Guacamole!…my husband and I also run a sport fishing business and assorted other enterprises—I’m not even going to begin to tell you about the red tape…”

Thank goodness for that small favor.

Not-so-secret Trump Despisers Paul Ryan and Mitch McConnell did a bang-up job of avoiding The Pretender’s name or record. They pled with the faithful to vote the straight GOP ticket, but with Barbara Bush leaving the building, who’s left? They ask the assembled to hold our noses for the the better good of their 2020 prophecies. Were they listening?

Susie Bright will be tweeting for Towleroad @TLRD all week in prime time during the GOP Convention.
Illustration by Jon Bailiff

Previous Post: « Randy Rainbow Spells It Out: ‘We Got Trump Trouble, America’ – WATCH
Next Post: There Was a ‘Gays for Trump’ Party at the RNC and It Was Absolutely Insane – VIDEOS, PHOTOS »