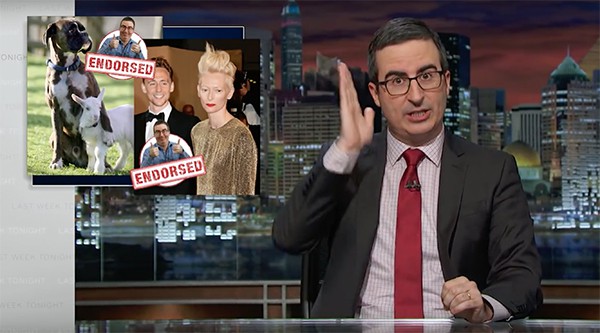 Even though HBO’s Last Week Tonight isn’t quite finished with its four-week Summer break yet, host John Oliver couldn’t resist the temptation and posted a video on the show’s YouTube page regarding the presidential election. (Or, “as it’s now better known, Uncle Sam’s Rock-Bottom Yankee Doodle Suicide Pact 2016.”)

In the web-exclusive clip, Oliver mentioned some of the endorsements both candidates have racked up (Hillary Clinton with Gloria Steinem, Stevie Wonder and Oprah Winfrey; Donald Trump with Kid Rock and Stephen Baldwin) and decided to come up with a few of his  own.

“Not for president, of course. Because of my accent, the only elected officials I can endorse are prime ministers, viceroys and magical railway controllers,” he said. 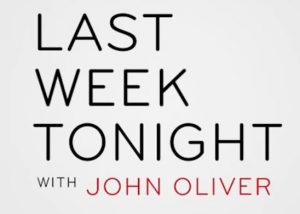 “But that doesn’t mean there aren’t things outside the realm of politics that I would like to formally endorse, starting with, obviously, animals wearing people clothes. I officially endorse you. You are charming and a wholesome delight, unlike people wearing animal clothes, which is generally a specific sex thing.”

Oliver also wholeheartedly endorses “interspecies friendships,” like a cute pair of “dog and goat BFFs” and an “unlikely pairing of Tilda Swinton and a human from Earth,” as well as the movie Pushing Tin, the1999 air traffic control film starring John Cusack and Billy Bob Thorton. Because “if you are looking for a snooze in the middle of an overcast Sunday afternoon,” he explained, “Pushing Tin will knock you the f**k out.”

Now on its third season, the show was just nominated for six Primetime Emmy Awards, including Outstanding Variety Talk Series.

Previous Post: « Las Vegas Makes Life Beautiful with Pride, Music, Art, Food, and Luxury Accommodations
Next Post: Caitlyn Jenner at RNC: It Was Harder to Come Out as Republican Than as Trans – WATCH »