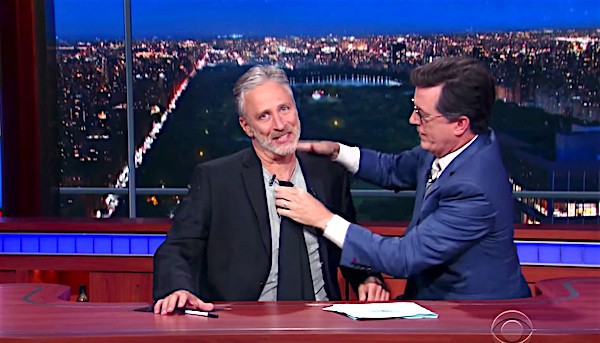 Jon Stewart got back in the political saddle again last night as he took over Stephen Colbert’s Late Show desk.

And, thankfully, headed straight for Donald Trump and the hypocritical conservatives who attacked Obama for being exactly what Trump is. Of course they’re now all on Trump’s team.

“A thin-skinned narcissist with no governmental experience. Yes, that sounds exactly like Barack Obama.”

Stewart then laid in to Sean Hannity (aka Lumpy) for labeling Trump a “blue collar billionaire,” praising Trump for using a teleprompter, and giving him a pass over his views about Mexicans.

And then Stewart got to the heart of why Trump has picked up so many hypocritical Republican supporters:

“You just want that person to give you your country back, because you feel you’re this country’s rightful owners. There’s only one problem with that: This country isn’t yours. You don’t own it. It never was. There is no real America. You don’t own it. You don’t own patriotism. You don’t own Christianity. You sure as hell don’t own respect for the bravery and sacrifice of military, police, and firefighters. Trust me. I saw a lot of people on the convention floor with their Blue Lives Matter rhetoric, who either remained silent or actively fought against the 9/11 first responders bill reauthorization. I see you, and I see your bulls**t. I see it!”