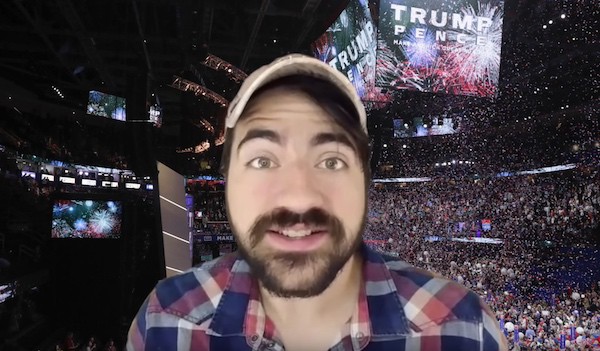 “Ted Cruz emerged from his mucus sac having fully assimilated into his latest flesh vessel to give a speech in which he pointedly refused to endorse his party’s nominee,” enthuses Crowder.

Crowder also parses the Trump speech but concludes on an upbeat note:

“The whole thing last night was one of the most disturbing experiences I can remember having watching an American politician, but, to keep me from being guilty of what I am accusing Donny of, I am gonna end on a positive note. Not once, but twice, overtly pro-LGBT sentiment received rounds of applause and cheers at the Republican National Convention. Holy s**t. I never thought I’d see that. And secondly, Trump himself didn’t mention God once. and that is the one glimmer of sunlight I saw through the s**t cyclone that was the Republican Convention this week.”