Orlando Cruz, the first professional boxer to come out as gay while active who is currently ranked at No. 4 among featherweights by the World Boxing Organization, will honor victims of the Pulse Orlando nightclub shooting at a match tonight in Kissimmee, Florida.

Morning 🌎 World I have the official T-shirt in support of the families of the victims at the Pulse Bar. pic.twitter.com/oYg2PtdOYv

Three days after the one-month anniversary of the June 12 shooting that claimed 49 lives and injured many others at Pulse, a gay nightclub in Orlando, Cruz will return to a familiar surrounding. Cruz (23-4, 11 knockouts) and Alejandro “Alex” Valdez (26-7, 20 KOs) are scheduled for a lightweight bout that will be the main event of a fight card Friday night at the Kissimmee Civic Center (201 E. Dakin Ave.).

Middleweight Moises Carasquillo Jr. and junior middleweight Anthony Arvelo, both from Orlando, and junior welterweight Jovan Perez of Kissimmee are part of the undercard.

“The healing process is so delicate and so tough,” said Perez, a picture of Jesus visible among the tattoos on his right arm. “This is us showing our appreciation toward them and showing them that we care. There is not one single thing that is going to help them heal.

Cruz was close friends with one of the shooting victims, 50-year-old Franky Jimmy Dejesus Velazquez.

He got this tattoo a few weeks ago in honor of the shooting victims: 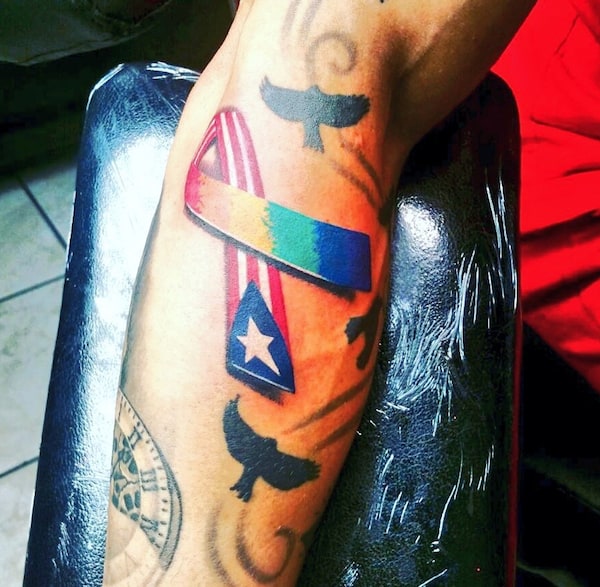 Said Cruz to Buzzfeed: “It really affected me and made me angry to see that among so many dead was my close friend. Gay people have rights just like everybody else and everyone needs to realize that we deserve to live openly and happy.”

The Sentinel reports on some of what will go down at tonight’s fight:

Ruben De Jesus, director of operations for the event’s promoter, All Star Boxing, said plans for this card started earlier this year because of television. (Some of the fights will be televised on Telemundo, beginning at 11:35 Friday night.) Cruz already was on board, but after the Pulse massacre, arrangements shifted to honor victims.

The bell will be rung 49 times — once for each of those killed four weeks ago — and an #OrlandoStrong banner will be prominent in the arena. Some Pulse victims and their families are expected to attend, De Jesus said.

Special trunks are being designed for Cruz, 35.

The card has a promotionally appropriate name, too.

“At first, I was sad [after the shooting],” Cruz said. “Second, angry. I am very angry because people are homophobic, so they attacked my community. They attacked me.”

Cruz also launched a Latino voting awareness campaign this week, according to Buzzfeed:

The campaign, a venture between All Star Boxing, Inc. and Mi Familia Vota, will include advertisements on the corners of the fighting ring and on clothing worn by boxers shown on Boxeo Telemundo, a leading boxing show on Spanish-language television, through the summer.

“Through the campaign we hope Latinos in the U.S. will go out to vote in large numbers without fear and make their voices heard,” Cruz told BuzzFeed News. “It’s important because as immigrants, many of whom who come here to look for stability, we have to advocate for our rights.”

The fight will be aired tonight at 11:35 pm on the Spanish language Telemundo network (NYC channel 47).