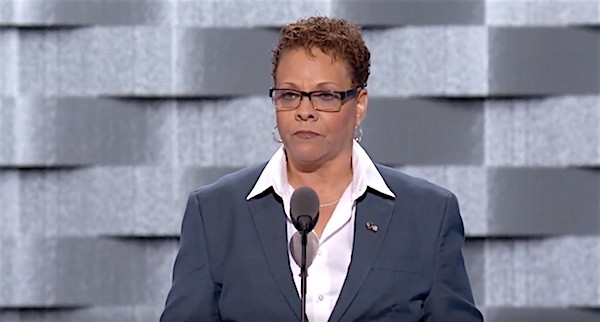 Out Nevada Senator Pat Spearman made a big splash at the Democratic National Convention on Monday night, ripping Donald Trump and Mike Pence for discriminating against LGBT Americans.

“We have heard Donald Trump say that he would protect the LGBTQ community. But he is against marriage equality and has said he is all for overturning it. Donald Trump says that anyone can use any bathroom in Trump Tower but he still supports heinous bathroom bills and he would strip away the rights of transgender Americans. But his worst attack on us was his vice presidential pick, Indiana Governor Mike Pence.”

“Governor Pence signed a law that allows individuals and businesses to deny services to LGBTQ Americans, and he used religion as a weapon to discriminate. As a lesbian, that hurts me. As a person of faith, that offends me. And as a legislator working hard to create jobs, that baffles me.

Previous Post: « Gay NBA Player Jason Collins: I Came Out to the Clintons Before I Came Out Publicly
Next Post: Ellen Page and Allison Janney In Netflix’s ‘Talulah,’ Plus the DNC and More TV This Week »