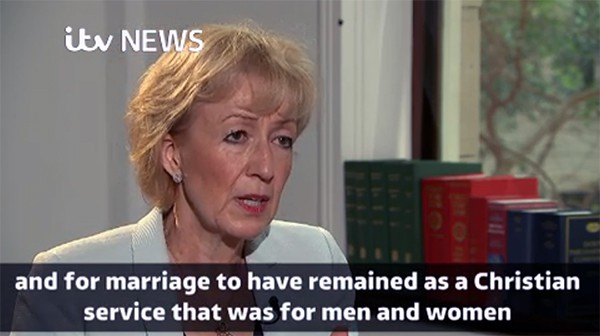 While most of the progressive thinkers in the U.S. are thrilled with the possibility of the election of the nation’s first female Commander in Chief and marveling at how far we’ve come as a nation, the idea is not exactly revolutionary, original or even rare: 63 out of 142 nations have had a female head of government or state at some point in the 50 years up to 2014, according to data from the Pew Research Center.

Today, as the Brexit mess continues to shape up how the U.K. will look like in the future, the race to decide who will replace Prime Minister David Cameron has reached its next phase, as the names of the two final candidates –both women– were chosen. The next Prime Minister will be either Home Secretary Theresa May or Energy Minister Andrea Leadsom.

While the U.S. had to wait until 2016 to have a woman as a presidential candidate for a major party, the U.K. sees two women battling out to become the country’s prime minister — for the second time! It sounds like a liberal Democrat’s dream-come-true, right?

Well, wrong. When it comes to LGBTQ issues, both women seem more aligned with the Tea Party.

Let’s take a look at where they stand:

When Theresa May was appointed as Home Secretary and Minister for Equality in 2010, U.K.-based LGBTQ news website PinkNews ran an analysis on how pro-gay May was. The results were pretty scary. 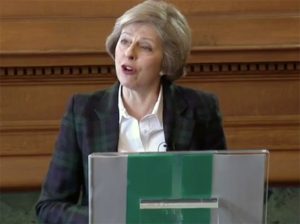 In 2001 and 2002 she voted against gay couples jointly adopting children. In 2004, even though she had voted in favor of civil partnerships, she “didn’t attend Parliament for any of the four votes that led to the Gender Recognition Act.” In 2008 she voted in favor of a “bill which said that IVF [in-vitro fertilization] rights should require a male role model–effectively discriminating against lesbian fertility rights.”

David Henry of OutRage!, an LGBT rights group claimed that Mrs May was “the wrong person for the job,” and told PinkNews.co.uk: “She hasn’t really made a lot of comments on homosexuality in the past, although she is a strong advocate for family. She’s always been against gay rights since I can remember. I’m pretty sure she’s opposed almost every gay rights measure.”

Today, The Independent  added that in 1998, May “voted against equalising the age of consent for gay sex.” She also “voted against repealing Section 28 — legislation that banned the “promotion” of homosexuality by local government and schools. She said no to same-sex adoption, no to civil partnerships, and she didn’t once bother to turn up to vote on the Gender Recognition Act either.”

During her time as Home Secretary, The Independent continues, “policies have been put in place which forced LGBT asylum seekers to “prove” their sexuality, some allegedly through intimate photos and videos of same-sex sexual activity. Others were told that they couldn’t be gay simply because they had children.”

It gets even worse with Energy Minister Andrea Leadsom.

PinkNews wrote that in a “number of blog posts on her official website, Ms Leadsom called for a system that would give heterosexual couples ‘priority’ in the adoption process.”

She “positively abstained” from voting for same-sex marriage in 2013 by voting both ways. In an interview with U.K.’s ITV Thursday, she (tried to) explain why: Leadsom “didn’t really like the legislation” passed by David Cameron, even though she believes that “love of same-sex couples is every bit as valuable as that of opposite-sex couples.” She even added: “I absolutely support gay marriage.”

Confused? So were we.

Leadsom further explained that her main concern is, apparently, the “consequences” to the “many Christians who are not comfortable about [same-sex marriage],”  and the “very clear hurt caused to many Christians who felt marriage in the Church can only be between a man and a woman.” She would have preferred “marriage to have remained as a Christian service that was for men and women who wanted to commit in the eyes of God.”

You can watch the full interview here:

Tory leadership hopeful Andrea Leadsom has organised a school exchange project for the last 10 years with a Ugandan centre co-run by an anti-gay Christian group that performs “gay cure” ministries and whose founder condemned homosexual love as “a sin,” BuzzFeed News can reveal.

The project, she said, “has been an astonishing success”, but she warned that that “over-sensitivity to cultural issues and a growing, muscular secularism has meant that the amazing work done by people of faith, often for the most vulnerable, goes unnoticed.”

Members of the Conservative Party will now decide the winning candidate on Sept. 9. The Financial Times notes that “the highly experienced home secretary [Theresa May], is the clear favourite after easily topping a preliminary poll among Conservative MPs.”