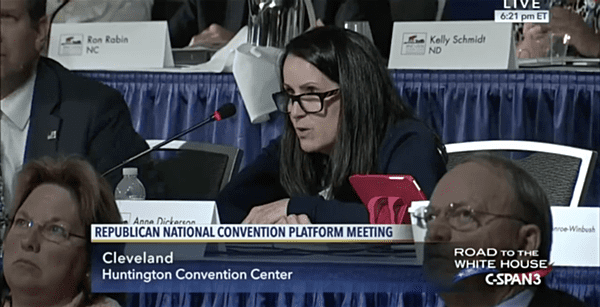 A Republican delegate on the GOP platform committee blasted her committee and her party for adopting virulently homophobic positions in the 2016 platform.

In a video posted on Facebook by California Lt. Governor Gavin Newsom, Republican New York delegate Anne Dickerson delivers a blistering and emotional rebuke of what she called the “outrageous” anti-LGBT planks in the party’s platform.

Dickerson is “an adviser to billionaire GOP donor Paul Singer, who is a proponent of same-sex marriage and other issues championed by the lesbian, gay, bisexual and transgender community,” according to The Hill.

Referring to language that says children are better off with a married mother and father, Dickerson said, “This is another poke in the eye to the gay community.” Facing off against homophobes such as hate group leader Tony Perkins, who was also on the platform committee, Dickerson excoriated the so-called “research” used to back up claims made my committee members that children of same-sex parents fare worse than children of opposite sex-parents.

“Continuing to suggest that a gay married couple, which is legal in our country, and was legal in 32 states prior to the recent Obergefell decision, this is outrageous to suggest that children of a gay couple are more likely to be completely imbalanced, and use drugs…and be criminals…I mean this is so provocative. And I completely disagree with this language. And I would hope that some fellow members would not want to continue to do harm, and would want to have a party of addition and not subtraction. And stop repelling gays, for God’s sake.”

More of Dickerson’s uphill fight against GOP homophobes via The Hill:

At one point, Dickerson, who has adopted children, accused others on the committee of “blatant discrimination” over an amendment that would keep publicly funded adoption agencies from giving custody of children to gay couples.

“We need children to be adopted, so hooray to the gay community for trying to raise children in a happy and stable home,” Dickerson said. “I object to allowing patent discrimination against gays over the right to adopt. … This is blatant discrimination and should not be in our platform.”

Dickerson lost that battle and essentially every other battle she waged. At times she stared down Perkins and expressed exasperation after votes went against her.

“Unbelievable,” she said after the adoption measure passed.

“This is awesome. This year’s GOP platform is the most anti-LGBT in the history of the Republican party. But one member of the platform committee, Annie Dickerson, decided to speak out and tell the members of the committee that she had enough of their bigotry.”