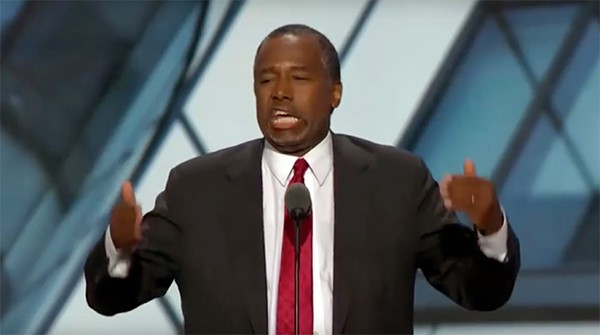 It’s no secret that Dr. Ben Carson had some of the most ignorant and radical anti-LGBT ideas among the 17 GOP candidates during primary season (which is not saying much), but the retired neurosurgeon seems to want the title of most-antigay-ever all to himself.

The Tea-Party favorite has compared homosexuality with bestiality and pedophilia; he thinks that being gay is “absolutely” a choice, because “a lot of people who go into prison straight, and when they come out they’re gay;” he believes the that LGBT community gets more legal protection than the Christians under the U.S. Constitution; he said that Indiana’s anti-lgbt “religious freedom law” was “absolutely vital.”

The list is long, and Dr. Carson’s ignorance is borderline hilarious.

Luckily for comedy (Saturday Night Live’s Jay Pharoah has his work cut out for him), but sadly for the entire nation, the list of Carson’s outrageous anti-gay ideas is still growing.

In the last 48 hours, the former Republican presidential candidate has linked Hillary Clinton to Lucifer (as in Satan), and proclaimed that being transgender didn’t “make any sense.”

“For someone to wake up and think that they belong to a different sex because they feel different that day is the same as if you woke up and said, ‘I’m Afghani today because I saw a movie about that last night, and even though my genetics might not indicate that, that’s the way I feel, and if you say that I’m not, then you’re a racist,’ ” Dr. Carson told The Hill Monday.

Getting a little more philosophical, the Yale graduate compared being transgender to a leopard not comfortable in its own skin: “[Being transgender] is not based on your feelings, it’s based on what you are,” Carson said. “Can a leopard change its spots? No. It can’t because it feels like maybe it’s a different creature. No. It’s still a leopard. Sorry.” 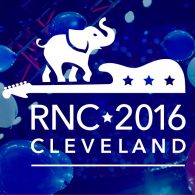 Tuesday on the second night of the GOP convention, an unusually energized Carson drew applause from the crowd when he attacked Hillary Clinton, saying that one of her “heroes” and “mentors” Saul Alinsky dedicated a book to Lucifer. “This was someone that she greatly admired and that affected all of her philosophies subsequently,” he said. “So are we willing to elect someone as president who has as their role model somebody who acknowledges Lucifer?”

Politifact.com reported that Alinsky’s book, entitled Rules for Radicals — A Practical Primer for Realistic Radicals, “offers advice to activists seeking to influence public policy, covering topics such as class differences and tactics such as disrupting meetings and winning media attention,” and it doesn’t really include any satanist ideas. The mention to Lucifer “strikes us as more of a provocative literary comment rather than direct advocacy for satanism. Alinsky seems to be acknowledging Lucifer only in a figurative sense, rather than a religious or devotional sense.” 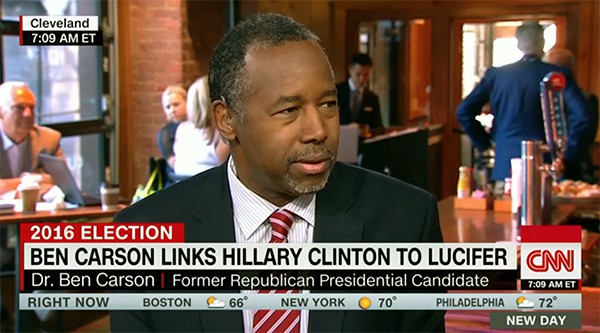 Wednesday morning in an interview on CNN’s New Day Dr. Carson defended his position linking Clinton to Lucifer and told anchor Chris Cuomo his goal was to point out what type of president Clinton would be.

Interestingly, The Huffington Post noted that Dr. Carson’s comments were not a part of his prepared remarks, and that he was “winging it,” as some reporters tweeted:

The teleprompter is rolling as the operator tries to get Carson back on text. but he's doing his own thing

Teleprompter has sentences about Hillary Clinton, but Ben Carson is talking about Lucifer.