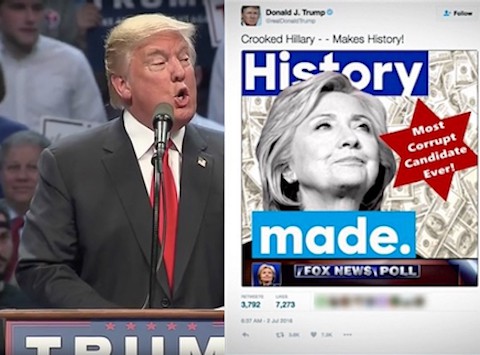 Donald Trump recently tweeted out a picture of Hillary Clinton next to a 6-pointed star over a pile of money with the words, “Most Corrupt Candidate Ever.” The image, wherever its origin, is a tasteless nod to anti-Semitic stereotypes of Jews as money hungry, miserly, and corrupt. The Trump campaign has since replaced the star with a crudely drawn circle — you can even still see the points of the star sticking out — and Mr. Trump has deputized his Jewish son-in-law, Jared Kushner, to vouch for how much his father-in-law “loves the Jews.”

Mr. Trump is defending the use of the star. It’s a sheriff’s badge, or it’s just like the star on the box for the doll from Frozen, or whatever nonsense he comes up with next. This defense, of course, ignores context: 6 pointed stars are not, in and of themselves anti-Semitic. When you place them on top of dollar bills and call someone “corrupt,” it’s a sharp dog whistle to the undercurrent of conservative America that hates Jews. Trevor Noah said it even better: crosses are not racist, but they are when you light them on fire and place them on a black person’s lawn.

Mr. Kushner’s response was a magician’s misdirection, essentially saying, “He can’t be an anti-Semite. He has a Jewish son-in-law.” That response, of course, is just like saying, “I can’t be racist. I have one black friend,” and ignores the fact, as researchers have shown over and over again, that many racists and anti-Semites exhibit tolerant, even kind, behavior to individual members of minority groups while holding the minority identity in contempt. “You’re a good kind of Jew” or “You’re not like the other gays” are two phrases I’ve heard quite a bit in my life.

But what’s more remarkable than this umpteenth piece of evidence that Trump is a hateful bigot — add Jews to women, Hispanics, persons of color, gays, foreigners, Muslims, women, Mexicans, women, Asians, the disabled, and women as identities Trump thinks it’s okay to harass, ridicule, and put down — is that Republicans have been sending out anti-Semitic and racist dog whistles for years.

Here’s a short list that took me 7 minutes to put together:

Sarah Palin, who referred to “New York liberals” more than a few times during her 2008 vice presidential campaign, used the term “blood libel” to refer to the media’s treatment of her. Ms. Palin is a pro at dog whistle racism, in general, calling President Obama “lackadaisical” in his pursuit of Edward Snowden.

Ms. Palin also gave a now infamous speech in which she referred to the “real America” — the heartland, the south, the mountain west — and denigrated parts of the country that do not share “American values,” i.e., New York, Boston, San Francisco, and Los Angeles.

Richard Nixon, who perfected the Republican Party’s Southern Strategy of appealing to racist whites, often referred to “Eastern establishment liberals” (both to Henry Kissinger’s face and behind his back).

Mitt Romney spent much of 2012 talking about how America is divided between “takers and makers.”

I could go on. Trump’s rhetoric may be racist, but members of the Republican Party — even those who now claim the mantle of being “mainstream” when compared to Trump — have been playing to the worst hatreds of white America for decades. No wonder so few of them are actually standing up to Trump. He’s just like them: underneath the bluster and orange tint are the same dog whistles to the arch conservative right.