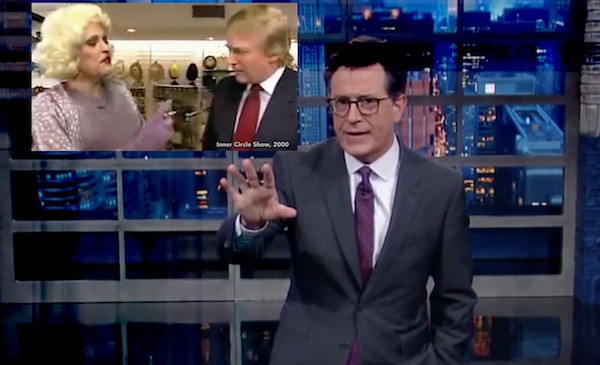 In a brilliant Late Show monologue last night, Stephen Colbert ripped Rudy Giuliani for fueling rumors about Hillary Clinton’s health by suggesting that people should go online and Google it.

Said Colbert: “I’m not surprised that he was able to diagnose Hillary Clinton so accurately without examining her. After all, Giuliani and Donald Trump are experts on female anatomy. It’s true.”

Colbert then played a clip of Trump motorboating Giuliani in drag, taken from The Inner Circle Show in 2000.

Colbert then went on to discuss more about Clinton’s health and revealed the real issue Republicans won’t talk about:

“I just want to say this to the Trump people out there. I don’t know why they say things like frail or weak or low energy. You’re just tiptoeing around the medical condition that you’re really upset about. One that she has that no other president in history has ever faced. Hillary Clinton has chronic no-penis.”