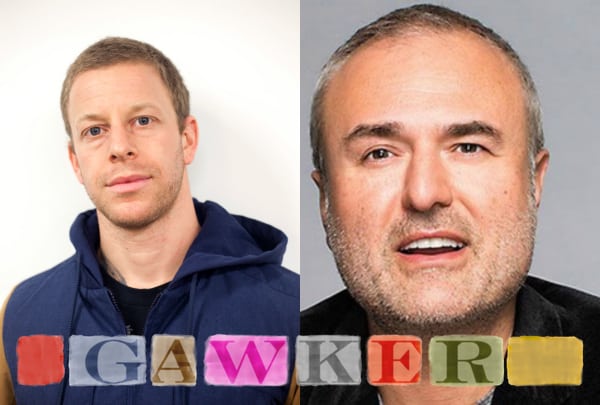 A former Gawker employee is speaking out about working for the soon-to-be defunct site, saying that Gawker was responsible for bullying but also, in his opinion, responsible for holding public officials accountable.

Joshua David Stein (above left) worked for Gawker in its early years after first being approached by founder Nick Denton (above right) about running a site for gay men. When Stein revealed that he wasn’t gay, Denton decided to place him at Gawker instead.

PREVIOUSLY: Gawker.com Announces End of Operations After 14 Years in Business

Writing an opinion piece for The Guardian, Stein sums up his experience thus: “I was callow, it was unkind, and together we did some pretty ignoble things.” Yet he adds, “So why am I sad to hear that after 14 long years, Gawkerdämmerung is nigh?”

Stein says he worked for Gawker for only little more than a year for a multitude of reasons but “mostly because what I discovered after a year was that Gawker was fertile ground for many things – ego, fame, alacrity, wit, a quick turn of phrase – but kindness was not one of them.”

Of Gawker’s particular brand of unkindness, and his role propelling it, Stein says:

“Now, it is not for the media to be kind or likable. And Gawker, up until its demise, was rarely confused with being either. However, when you’d run into the people you had mocked, the cost of being neither was tangible. There is no mistaking fear for affection – though as a young man, I am ashamed to admit I preferred the former to the latter.

What made the dynamic even more icky is how symbiotic the relationship between the gawker and the gawked became. Fameballs, as we called them, relied on us for publicity; and we on them, for material. But it didn’t mask the fact that we were – though righteous – bullies.”

But at the end of the day, Stein says he and both Gawker were bullies, despite any redeeming qualities it may have had. He writes, “…the Gawker of which I was a part did nothing noble. We were big fish in a little pond; I was young, calling phonies phoney, blind to the fact that I had become a bully. That does not mean, however, that Gawker didn’t go on to do great and important things, and it does not mean it will not be missed.”

Stein added on Twitter, “We were bullies at Gawker but at least we held the powerful to account.”