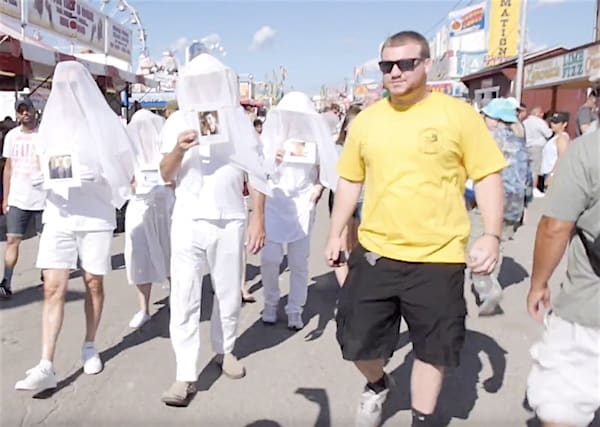 Six members of the activist organization Gays Against Guns (GAG) paid a visit to the New Jersey State Fair on Sunday in conservative Sussex County.

The group told Towleroad: “Gays Against Guns has had a powerful presence in the 6 weeks since its founding in places like the NYC Pride march and at protests against corporate and political enemies in central NYC and DC, but this was the first time the group went into mixed/hostile territory, and you can see as much from the video. What they did was very brave. We hope to seed unnerving, silent, nonviolent actions like this at points of NRA and gun-industry power all over the U.S.”

The activists, draped in white, carried framed photos of people who lost their lives by gun violence.

They staked out a place in front of the National Rifle Association (NRA) booth where they held a peaceful, silent vigil. As you can see from the video there were more than a few people who were unhappy to see them.