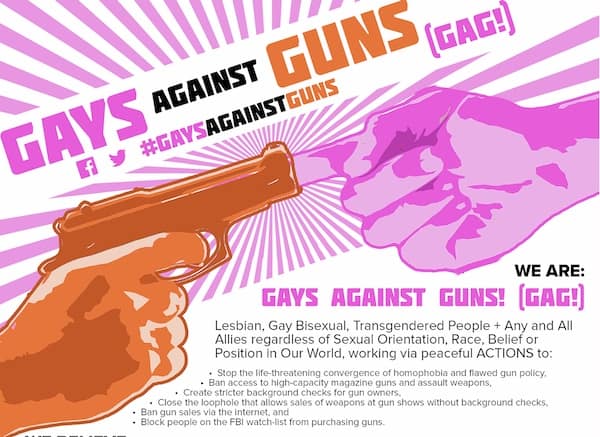 Sunday’s NYC Pride parade will include an important new contingent of marchers. Hundreds of people will march in a group called Gays Against Guns (GAG), formed in the wake of the June 12 Orlando massacre. The parade begins this Sunday at noon starting at 36th street and Fifth Avenue in Manhattan.

About 150 people showed up for GAG’s first organizational meeting at the LGBT Community Center on Friday, June 17, to organize the group’s presence at the March. In attendance was openly gay City Councilmember Corey Johnson, who invited GAG to join his March contingent. “Gays Against Guns is taking this fight to the NRA’s front door,” said Johnson. “Our community has been fighting for gun control as part of other organizations for many years, now we’re starting our own. The LGBT community has vanquished bigger enemies than the NRA.”

Said Kevin Hertzog, who started the group with Brian Worth, “We know that several groups have been fighting gun violence in the U.S. for decades now. We’ll be meeting after Pride to hash out positions and a strategy approaching the November 2 elections. But for now, we want to present as large a crowd as possible on Sunday, to show New York and the U.S. that LGBTQ people are outraged. The current situation with guns in America makes us gag in disgust!”

Said Worth, “An FBI analysis just showed that LGBT people are the likeliest target for hate crimes. Homophobia plus civilian access to assault weapons like the one used in Orlando equal a deadly combination for queer people. We’ll determine the most strategic role our community can play in this fight.”

GAG is assembling a diverse contingent of queer people and their allies. “I spent years fighting for marriage equality to protect my family,” said Catherine Marino-Thomas, emeritus board president, Marriage Equality USA. “I’ll be marching Sunday once again to protect my family. This time, it’s hit us too close to home.”

GAG is planning visual features for its role in the March that will symbolize both bereavement for its queer siblings in Orlando and its fierce determination to bring its community’s unique history of street activism into the preexisting movement for tougher gun laws.

(Staging area is 35th street between Fifth and Madison, Section 0, Group 33, from about 11am.)