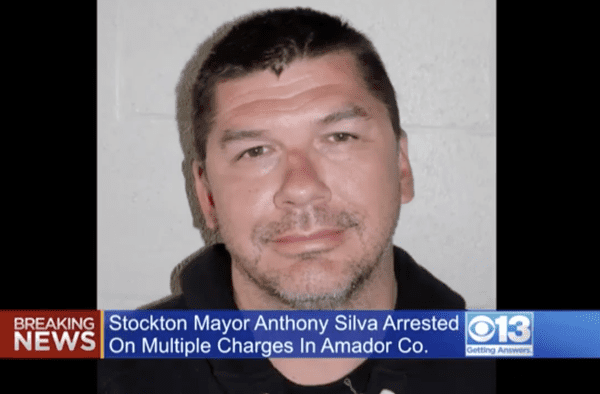 The mayor of Stockton, California was arrested at a youth camp where he is accused of, among other things, having taped a game of strip poker he played with teen boys in his cabin.

That mayor, Anthony Silva, was an advisor and leader at the Stockton youth camp prior to being arrested. He has been released on $20,000 bail.

Silva reportedly only taped an audio recording of the strip poker game. According to authorities, at least one 16 year-old boy was naked during that game.

Silva is officially charged with eavesdropping or recording confidential communications, contributing to the delinquency of a minor, providing alcohol to a minor and cruelty to a child by endangering health.

The arrest stems from a September 2015 FBI investigation where Silva’s cell phone was seized by Homeland Security investigators at San Francisco International Airport as he got off a flight from China.

One of the clips on Silva’s phone contained audio of several people during a strip poker game in Silva’s bedroom at the camp, the Amador County district attorney said. One of the participants was 16 years old. […]

Witnesses stated that Silva supplied alcohol to a number of underage counselors at the camp as well, according to the Amador County district attorney.

“He absolutely maintains his innocence, and he’s looking forward to his day in court and he absolutely believes he will be vindicated,” [Silva’s lawyer Allen] Sawyer said.

The blog Back2Stonewall describes Silva as “a family values anti-gay GOP politician who has held official town hall meetings at an anti-gay megachurch and gave the key to the city of Stockton to God.”

This is not the first time that Silva has been accused of inappropriate behavior with a minor. In 2004, he allegedly secretly taped male teenagers using his private bathroom in his apartment. Silva was a high school water polo coach at the time. No charges were filed in that case.

Back in 2013, Silva was accused of sexual battery involving a 19-year-old woman.

Add to those past allegations of wrong-doing the fact that a gun reportedly stolen from Silva’s home was used to a kill a 13-year-old boy last year, according to CBS news. Silva didn’t report the gun stolen until a month after it supposedly went missing. Police have said Silva did not cooperatewith their investigation.

Watch news reports on Silva’s latest troubles with the law, via CBS 13, below.

Previous Post: « Watch ‘Gays Against Guns’ Pay a Brave, Haunting Visit to the NRA and the NJ State Fair
Next Post: Tom Daley and Dan Goodfellow Win Bronze at Rio and Celebrate in the Most Adorable Way Possible – WATCH »