You are here: Home / While GOP Jumps Ship on Trump, Log Cabin Republicans May Still Endorse Him – VIDEO 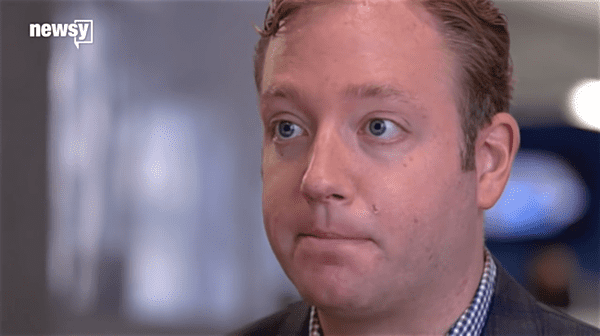 Gay GOP group the Log Cabin Republicans may still endorse Donald Trump despite his abominable record on LGBT rights and his tacit approval of the most anti-LGBT party platform in the history of the Republican party.

Log Cabin president Gregory T. Angelo told The Washington Blade’s Chris Johnson that an endorsement for Trump is still on the table and will depend on the feedback from the group’s members:

“Any inclinations I have right now would be pure conjecture at this point,” Angelo said. “I clearly have members around the country sharing their thoughts and opinions with me as I’ve traveled around on behalf of Log Cabin Republicans, especially over the course of the last three months, but that’s all just anecdotal at this point.”

The board of directors, Angelo said, will make the endorsement determination no earlier than during an upcoming meeting in late September in D.C. The exact date for the meeting isn’t yet decided, and as is customary for Log Cabin board meetings, the discussion won’t be open to the public, Angelo said.

Angelo added that Log Cabin members will make their decision not solely based on LGBT rights issues:

“What I will say is that we don’t view any candidates that we provide with endorsement considerations for any single issue, and I will say that there are members around the country, and even members on our national board of directors who have strong reservations about Donald Trump outside of any considerations that he might have in regards to LGBT issues,” Angelo said.

The Log Cabin Republicans cannot endorse a candidate that is not the Republican nominee according to its bylaws. So the most the group could do to rebuke Trump is to withhold its endorsement. Log Cabin Republicans have withheld their endorsement only once before, in 2004, over President George W. Bush’s support for a constitutional amendment banning same-sex marriage.

RELATED: Dan Savage Blasts Log Cabin Republicans for Continuing to Support the GOP That Hates Them 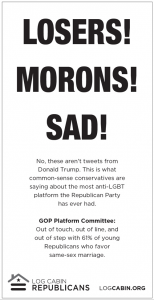 It was only two weeks ago that the Log Cabin Republicans placed a full page ad in USA Today during the RNC, condemning the GOP platform as the most homophobic in its history. Angelo also personally condemned the party’s platform for it’s anti-gay language.

In the meantime, reports have surfaced indicating that Trump and his ilk put up no fight about the anti-LGBT planks in the platform. In fact, the only thing the campaign seemed to care about was softening language that was tough on Vladimir Putin and Russia pertaining to Ukraine. And while Trump may have name-checked the ‘LGBTQ’ community in his RNC acceptance speech, he has yet to demonstrate any support for LGBT rights that surpasses rhetoric.

News that the Log Cabin Republicans are still considering endorsing Trump is particularly surprising given the events of the past 24 hours. In that time, Trump has continued to attack the family of fallen Army Captain Humayun Khan and refused to endorse fellow Republicans Paul Ryan, John McCain and Kelly Ayotte. Add to that the endorsement of Hillary Clinton by prominent Republicans Meg Whitman and Congressman Richard Hanna, reports of a looming intervention staged by top RNC officials, plus the rumored preparations for what the party would do if Trump drops out of the race, and the Log Cabin Republicans’ continued fence-sitting makes even less sense.

Watch a report, below.