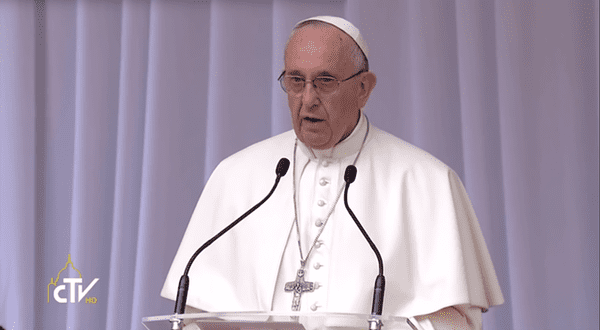 During a recent trip to Poland, Pope Francis condemned school policies around the world that he says allow children to ‘choose their own gender.’

Pope Francis said it is “terrible” that, “Today in schools, they are teaching this to children — to children! — that everyone can choose their own gender.”

RELATED: Magician Destroys the Transgender Bathroom Myth with the Help of Peanut Butter and Jelly – WATCH

Pope Francis spoke about transgender children while addressing a closed door meeting with bishops in Poland.

The pope said he wanted to conclude his remarks by reflecting on this: “We are living a moment of annihilation of man as image of God.” […]

Without specifying, he blamed this on textbooks supplied by “persons and institutions who donate money.” The pope blamed what he called “ideological colonizing” backed by “very influential countries” which he didn’t identify.

One such “colonization” he said — “I’ll say it clearly with its first and last name — is gender.”

Francis also brought up the previous pope, Benedict, in his comments on transgender children. The Pope said,

Pope Francis has a muddled record on LGBT rights. He has been described by some as the most-LGBT friendly pontiff ever. In the wake of the Orlando massacre, he said that the Catholic Church should apologize to and seek forgiveness from gay people. However, he remains a staunch opponent to same-sex marriage.

Watch a video from USA Today, below.