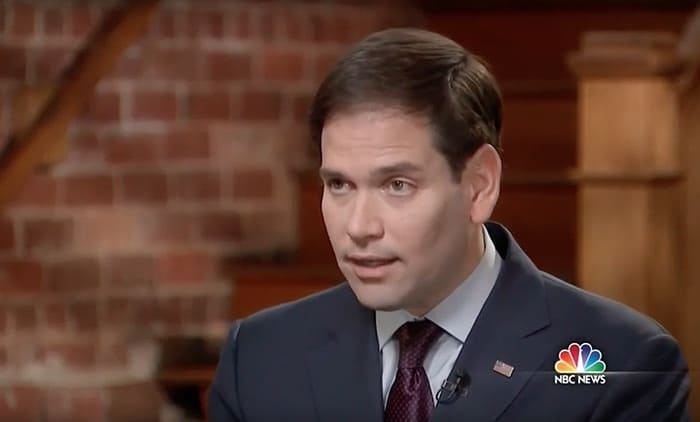 Senator Marco Rubio will headline an anti-LGBT religious conference being held in Orlando on the two month anniversary of the massacre at gay nightclub Pulse.

The Orlando-based Liberty Counsel Action, an extreme anti-LGBT group whose affiliate is famous for representing Kentucky clerk Kim Davis in her stand against the Supreme Court’s marriage equality decision, announced in an email [on July 27] that the Florida Renewal Project will be hosting an event called “Rediscovering God in America” in August. The event will be headlined by Rubio, who will speak alongside anti-LGBT activists David Barton, Bill Federer, Ken Graves and Mat Staver.

The Florida Renewal Project is an affiliate of conservative activist David Lane’s American Renewal Project, which hosts “Rediscovering God” conferences around the country.

Mat Staver is perhaps the most famous person on that list, as he represented anti-gay county clerk Kim Davis as she defied the Supreme Court’s ruling on gay marriage.

Another individual slated to appear at the conference is notorious homophobe David Lane. More on his record via NCRM:

Lane has called homosexuality “debauchery,” suggested that Christians should be prepared to martyr themselves in order to prevent marriage equality, and has said that homosexuality is a moral crisis that “threatened our utter destruction.”

Lane’s focus for several years has been to encourage anti-LGBT Christian pastorsto run for political offices across local, state, and national levels. He has been closely tied to Mike Huckabee, Rand Paul, Rick Perry, and Ted Cruz, and in 2013 Lane wrote an op-ed calling for a “war to restore a Christian America.”

Rubio previously insinuated that it was the Orlando massacre which motivated him to seek re-election to the Senate after saying he would not seek re-election if he lost his bid for the Republican nomination for president (which he did). And while Rubio tried to court favor with the LGBT community in the days following the massacre, he’s apparently gone back to his old habits of pal-ing around with dangerous homophobes who sow the seeds of violent anti-LGBT crimes with their hateful rhetoric.

“The event ‘Rediscovering God in America Renewal Project’ is a who’s who [of] some of the country’s most hateful anti-LGBT persons. It’s incredulous a Senator of [the] United States is willing to collude with individuals who are dedicated to oppressing LGBT people. The beliefs shared by this group actively harm LGBT people. This is not the America we want. God will not be found anywhere near that event.”