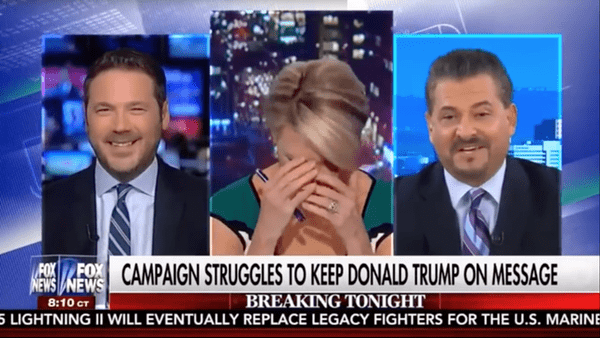 Megyn Kelly, perhaps much like RNC Chair RNC Preibus, is apoplectic over Donald Trump’s inability to not self-destruct.

Kelly played a video of Trump on the stump on Wednesday in which he reminded voters of all the scandals he has been entangled in since he started running for president. While Trump may be trying to ‘counterpunch’, all he ends up doing is undermining his own campaign.

Kelly said, “What is he doing relitigating every controversy from the primary season?”

Kelly also took a dig at Trump after he claimed he’s a friend to disabled people because he’s spent millions of dollars putting ramps in his buildings. “The fact that Trump has put ramps in his building is required by law, he doesn’t get extra credit for that!” Kelly said.

When Trump supporter David Wohl responded by saying, “They’re very expensive in his buildings, Megyn,” Kelly lost it. “Oh good God,” she said as she put her head down on her news desk.

Of Trump’s inability to stay on message and his love of controversy, Kelly added, “It’s true the mainstream media now hates Trump…but must he help them? Must he help them so generously every single day?”

I mean. We’re fine with it.

RELATED: Seth Meyers Tells Dems to ‘Stay Out Of It’: ‘Let Trump Dig His Own Grave’ – WATCH

Watch Kelly lose her ability to even, below.