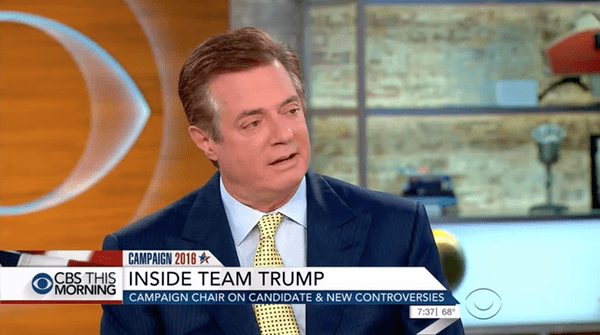 Donald Trump’s campaign manager Paul Manafort says he misspoke on Thursday when he said that he would soon be supporting Paul Ryan as a candidate for president.

Manafort made the comment about Ryan when responding to questions about Trump’s refusal to endorse Speaker Ryan in his primary race. Manafort told CBS This Morning, “Look. I support the speaker and I know after next week, I’m supporting him as a candidate for president, too.”

That response immediately drew laughter from Manafort and the show’s anchors, all of whom appeared aware of how big of an unforced error Manafort had just made.

Co-host Norah O’Donnell remarked, “Oh, there is talk about that!”

The other co-host, Charlie Rose, asked, “So Donald Trump is getting out of the election and Paul Ryan is jumping in?”

Manafort added at the end of the segment, “I’m going to get in trouble on that one.”

This is not the first time during this election cycle that Paul Ryan has been mentioned as a possible presidential contender who could wrest the party’s nomination away from Donald Trump. In April of this year, when Trump had virtually locked in the requisite number of delegates to win the GOP nomination, speculation grew that Ryan might be considering throwing his hat in the ring because of a video he released that looked an awful lot like a presidential campaign video.

Rachel Maddow dug into that prospect on her show at the time. Watch her take, below.