2016 POLLS. Clinton opens 11-point lead over Trump in Pennsylvania, says Franklin and Marshall College poll: “Clinton has 49 percent in the poll among likely Pennsylvania voters while Trump has 38 percent. Among registered voters in the state, Clinton has a slightly larger lead, 48 to 35 percent. Clinton is supported by 78 percent of registered Democrats and Trump is supported by 69 percent of registered Republicans. Trump leads among white voters with a high school degree or less, but Clinton leads among college-educated whites. Trump also leads among white men, 45 to 35 percent, but Clinton leads among women, 57 to 29 percent.”

ROMNEY ADVISOR. Trump campaign not “functional” or “well-organized by any metric.”

CALIFORNIA’S RIVERSIDE COUNTY GOP. Ready for Hillary: “I was made aware of derogatory tweet this afternoon toward Secretary Clinton when the Press-Enterprise called me for comment. I was horrified and had the tweet taken down immediately,” [Riverside County GOP Chairman Scott] Mann said in an email to the Times on Wednesday afternoon. “While some may think it was political satire, it clearly has no place in American political dialogue. As chairman of the Republican Party of Riverside County, I apologize to everyone and anyone who was offended by it.” 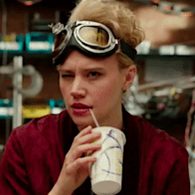 SAME OLD STORY. Gay characters in Hollywood mainstream films barely there: “…alongside the smell of popcorn, there’s a strong whiff of studio cowardice at the multiplex this summer with film-makers holding back when they should have been letting go. Rather than being offered some much-needed diversity, we’ve been given a stale reminder of the tiresome heteronormativity that continues to stifle change within blockbusters.”

AMSTERDAM. Security boosted for Gay Pride canal parade: “This year the city is also hosting the EuroPride event and authorities warned there “will be substantially more police present than last year” during the regular annual Gay Pride celebrations. No specific threat has been made against the city or the gay pride celebrations, authorities said, adding the first 10 days marked by over 300 events had gone well.”

CAVE DWELLERS. Family runs into shirtless Justin Trudeau while vacationing: “Justin Trudeau surprised a family out on a hike Tuesday — when the Canadian prime minister sprang from a cave without a shirt.”

#Glory. My new album & the beginning of a new era. Available 8/26 on @AppleMusic. Pre-order tonight at midnight ET. pic.twitter.com/pkZZkC2QLR

Previous Post: « Paul Manafort on Paul Ryan: ‘I’m Going to Support Him as a Candidate for President’ Next Week – WATCH
Next Post: Get Your First Look at Adam Lambert in ‘The Rocky Horror Picture Show’ – VIDEO »