DISHONORS. Veteran gives Donald Trump his Purple Heart medal at Virginia rally. “I always wanted to get the Purple Heart. This was much easier.”

2016 ELECTION. Reince Priebus furious at Trump for not endorsing Paul Ryan: “Priebus is “apoplectic” over Trump’s remarks and called campaign chairman Paul Manafort and other top staffers to voice his “extreme displeasure,” NBC reported, citing a source in the GOP.”

RIO 2016: Michael Phelps to be flag-bearer for Team USA.

CHARLOTTE. Gay Pride festival will get extra security: “Officials in Charlotte have declared the city’s gay pride festival later this month is an extraordinary event that requires extra security. City officials say the decision allows them to ban backpacks and regular items that can be used as weapons, such as chains and box cutters at the Aug. 20-21 event. It also allows police more latitude to stop and search people.”

On assignment with @NBCOUT. Gays Against Guns protest outside of National Shooting Sports Foundation Conference. pic.twitter.com/I3ydnLvmN8

MICHAEL ALLARDICE. New Zealand rugby player apologizes for homophobic slur. “I have today contacted Brendan and apologised for the offence caused by my inappropriate comments, regardless of who they were directed at. I have expressed to Brendan that I have taken full responsibility for my actions, but I have also assured him that there was no malicious intent in my comments – I wasn’t yelling at a stranger to inflict hurt.”

DUBAI. Emirates jet crash lands, bursts into flames. All survive. “EK521 had 282 passengers from 20 countries and 18 crew on board according toposts made by the airline on Facebook. It was also able to confirm that, somewhat miraculously, there were no fatalities in the incident. Emergency response crews were also able to subdue the flames.” 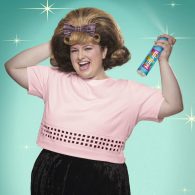 HAIRSPRAY LIVE. Sean Hayes and Rosie O’Donnell join the cast: “Hayes will play friendly shop owner Mr. Pinky in the upcoming production, it was announced today at TCA, while Rosie O’Donnell has also been cast as the gym teacher. The two join the previously announced cast of Kristin Chenoweth as Velma von Tussle, Ariana Grande as Penny Pingleton, Jennifer Hudson as Motormouth Maybelle, and Derek Hough as Corny Collins.”