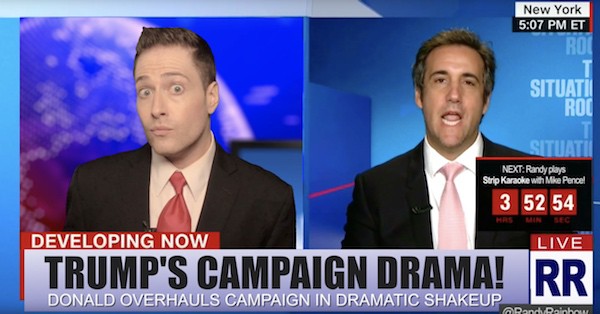 On Wednesday, the nation saw loathsome Trump counsel Michael Cohen be made a fool of on CNN and repeatedly ask, “says who?” when told that by CNN’s Brianna Keller that his candidate was down in the polls.

RELATED: Trump Adviser Denies that Donald is Down in the Polls: ‘Says Who?’ – WATCH

Randy Rainbow decided to have a follow-up interview with Cohen and it seems that after all that humiliation, Trump’s lawyer still hasn’t changed his tune.

Previous Post: « Provincetown Carnival Went Back to the ’80s Yesterday and You Can See It All Here: VIDEO
Next Post: Trump Campaign Chair Paul Manafort Resigns »