ALL-STAR GAME. NBA chooses New Orleans for 2017 All-Star game after moving from Charlotte over North Carolina’s discriminatory HB 2. “Unlike several other Southern states, Louisiana has not been swept up in legislative efforts to pass laws similar to that in North Carolina – a fact Gov. John Bel Edwards has touted while lobbying the NBA to bring its All-Star weekend to New Orleans for a third time.”

2016 ELECTION. Why isn’t Trump tweeting about the Olympics? “The spectacle of America vanquishing its global rivals is—ironically, amazingly—utterly terrible for the ‘America First’ candidate. A big part of his political message, the one you hear at his stump speeches, is that America has grown weak. America doesn’t win anymore, he says. “Crippled America” is the title of his most recent book. He alone can Make American Great Again. As someone who’s been around a few campaigns, believe me: The Olympics is about the worst thing that could have happened to the Trump train.” 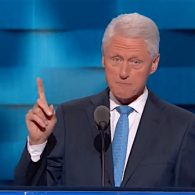 CLINTON FOUNDATION. If Hillary wins, they’ll stop accepting foreign and corporate donations: “Should Clinton win the White House in November, the foundation will accept donations only from U.S. citizens and independent charities, The Associated Press first reported. Former President Bill Clinton told staffers about the change during a meeting in which he also announced that the Clinton Global Initiative will hold its final annual meeting next month and that he will resign from the foundation’s board, the spokesman confirmed.”

KATRINA PIERSON. Trump spokeswoman claims Hillary has brain disease: “Trump has long claimed that Clinton lacks the physical stamina to be president and has stated repeatedly that she takes weekends off to catch up on her sleep. But Trump and his campaign have not directly engaged with conspiracy theories, circulated on ultra-right wing blogs and talk shows, that Clinton’s health is badly deteriorating and that the media is complicit in a cover-up.  There is no evidence to back those claims up and Clinton’s physician, Dr. Lisa Bardack, has repeatedly stated that the former secretary of State is fit to serve. ”

RURAL SUMMIT. Iowa confab looks at how to make life better for LGBT people in rural Iowa. “There weren’t gay people that you knew of,” Bryan Huff recalled of his days growing up in Madison County, “In fact, you didn’t know what ‘gay’ was. You just think, well, you have feelings. You just think all these people have feelings. Obviously, you’re not supposed to express them, because no one else does.”

VIDEO OF THE DAY. Coldplay “A Head Full of Dreams”.