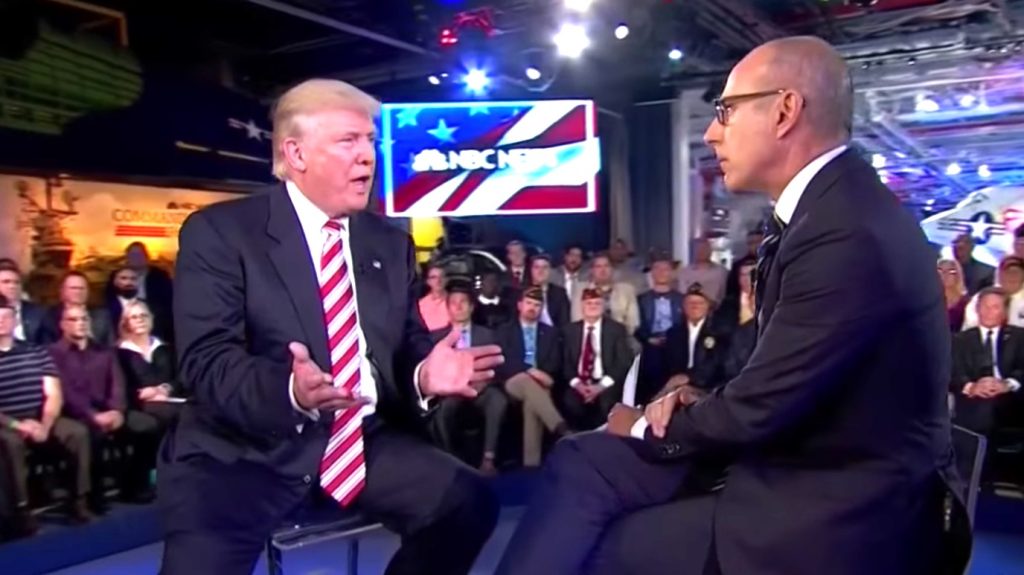 Matt Lauer was widely panned on social media for his poor moderation of last night’s Commander-In-Chief Forum Town Hall on MSNBC. But at the top of grievance lists was Lauer failing to challenge Donald Trump as he blatantly lied about his position on Iraq.

Here’s the 2002 Stern interview where Trump said “Yeah, I guess so” when asked if he supported the invasion of Iraq.

Added Trump: “I wish the first time it was done correctly.”

As Think Progress notes, “There is no record of Trump saying anything else publicly about the Iraq War before the invasion.”

Buzzfeed has an excellent history of his statements on the topic.

The other Lauer failure: Libya.

Trump also did not oppose U.S. involvement in the military effort to depose Libyan dictator Muammar Gaddafi in 2011. In a video blog about Libya from 2011, Trump said, “Gaddafi in Libya is killing thousands of people, nobody knows how bad it is, and we’re sitting around, we have soldiers all [around] the Middle East, and we’re not bringing them in to stop this horrible carnage… Now we should go in, we should stop this guy, which would be very easy and very quick.”

Nonetheless, during his campaign Trump has repeatedly said he “would have stayed out of Libya” — a lie he’s previously been praised for on MSNBC. And tonight, Lauer didn’t challenge Trump’s false suggestion that Clinton, who was Secretary of State at the time, “made a terrible mistake on Libya” by making a decision different from what he would’ve done.

Compare the non-follow-up to that of Lauer’s tone and relentless questioning of Clinton over the email server:

Here are some thought on the issue from Michelangelo Signorile:

Matt Lauer is getting pummeled on social media and in many media reports for ambushing HIllary Clinton last night and softballing Trump.

I don’t think this was about bias, or “liberal guilt” and trying to “prove” he could be tough on a liberal. I think it was about a few other things:

1) Lauer is not a political reporter nor does he interview politicians about issues; he interviews personalities. I doubt he even followed the days of criticism by pundits of the media’s terrible handling of the emails/foundation and Trump getting off with nothing.

2) Donald Trump is a celebrity and a formidable one, and in Lauer’s world — and NBC was Donald Trump’s home — that is more intimidating than a mere politician, even if it’s Hillary Clinton.

3) Jumping off on number 1 and 2, Lauer was totally out of his league, not well-informed on the issues, thinking he had to do some gotcha, seeing only headlines out there and TV, and he was pressed for time. But he got caught up in the email thing — not realizing it’s all been played out — not able to really get the gotcha as he tried to keep going.

Because he was pressed for time, he wound up then bullying a woman into answering questions quickly. But then he himself was bullied by a man who dodged, and talked over him, and Lauer fearful of challenging him. The result was a disaster, a lesson for the debate moderators and will probably help Clinton in the end. But we all need to express outrage at the media for the terrible job they’re doing in covering this election.