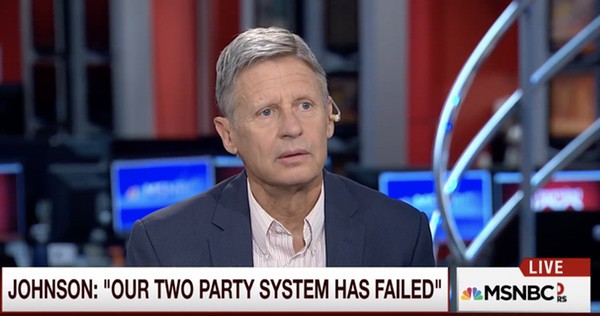 Libertarian presidential candidate Gary Johnson stunned Morning Joe hosts when he was asked a question about Aleppo, and didn’t know what it was.

“What is Aleppo?”, Johnson asked.

“Aleppo is in Syria. It’s the epicenter of the refugee crisis,” Mike Barnicle explained.

Joe Scarborough then dove in: “You asked, ‘What is Aleppo?’ Do you really think that foreign policy is so insignificant that somebody running for president of the United States shouldn’t even know what Aleppo is, where Aleppo is, why Aleppo is so important?”

To earn an invitation to the first debate, Johnson, the former New Mexico governor, needs to score more than 15 percent on an average of five national polls the debate commission has picked as its criteria. The most recent surveys from the polls pegged Johnson’s average at 8.8 percent, down from 9.2 percent a week ago.

I hope voters get to see former GOP Governors Gary Johnson and Bill Weld on the debate stages this fall.