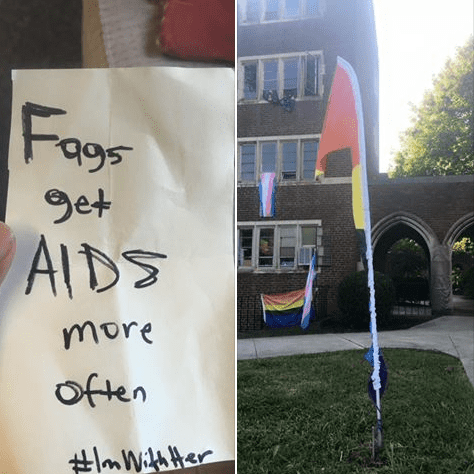 The Pride Center at the University of Tennessee was targeted by vandals yet again this past weekend, the latest of several incidents since the controversy over an article posted by its director encouraging the use of gender-neutral pronouns.

This time, the Pride Center reports that someone ripped down its rainbow flag and left a note in its place reading, “Fags get AIDS more often. #ImWithHer.”

“Glad to see how welcoming this campus is coming back from a long weekend,” wrote Thomas Tran, a student whose photos of the vandalism were shared on the center’s Facebook page. “All of this was found this morning. Someone decided to exercise their freedom of speech and left us a message after destroying our flag. This is what we are up against. This is the type of thing that will most likely get swept under the rug by administration who do not care for us.”

The university reported on Twitter that a bias report had been filed, and campus police are investigating:

Incidents like this have no place on our campus. A bias incident report has been filed, and UTPD is investigating.

The vandalism occurred on the one-year anniversary of the university’s decision to remove the gender-neutral pronouns article by the center’s director from its website:

This past weekend was the 1 year anniversary of #UTK removing the gender neutral pronouns article; today's vandalism is the legacy of that.

In response to controversy over the article, state lawmakers voted to defund the Pride Center, which is now staffed by student ambassadors and funded largely by donations. In the last year, vandals have also broken out windows at the Pride Center, repeatedly stolen its flags and scratched out “LGBT” from its sign.

“I think (the vandalism) is definitely a pattern within the campus climate,” Pride Center ambassador Chesnea Skeen told The Knoxville News Sentinel. “We’ve had multiple vandalisms within the last year or so, and they seem to be getting more direct and more personal.”

Watch a report from WVLT below.

Previous Post: « At 50, a Gay Man Recalls the Vicious Hate Crime That Put Him on the Cover of Newsweek
Next Post: Seth Meyers Mocks Donald Trump’s Visit to a Black Church – WATCH »