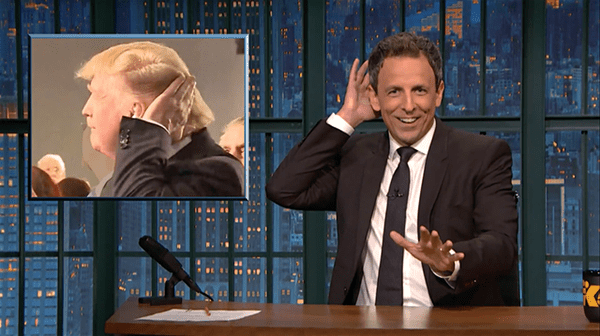 Seth Meyers ripped Donald Trump on Tuesday night for his paltry attempt at outreach to African American and Latino voters.

Despite Trump’s “well documented history of stoking racial resentment and attracting the support of white nationalists,” Trump apparently thought he could “overcome all that by going to a church in Detroit and awkwardly swaying back-and-forth like a dad who brought his kids to a Demi Lovato concert,” Meyers quipped.

He added, “Also, I love how anytime Trump engages in even the slightest physical activity, he has to check to make sure his hair is still there.”

As for being “the original Birther”, Trump now says only that he’s not talking about that anymore. Which as Meyers points out, isn’t exactly a sufficient answer to questions about accusing the President of the United States of orchestrating a vast left-wing conspiracy to hide the true country of his birth. Joked Meyers, “You’re a presidential candidate. Not Ben Affleck being asked about Gigli.”

Despite his attempts to appeal to non-white voters, Trump can’t seem to escape the fact that his campaign has been built on “tough talk” meant to reassure “white voters who think they’re an endangered species.”