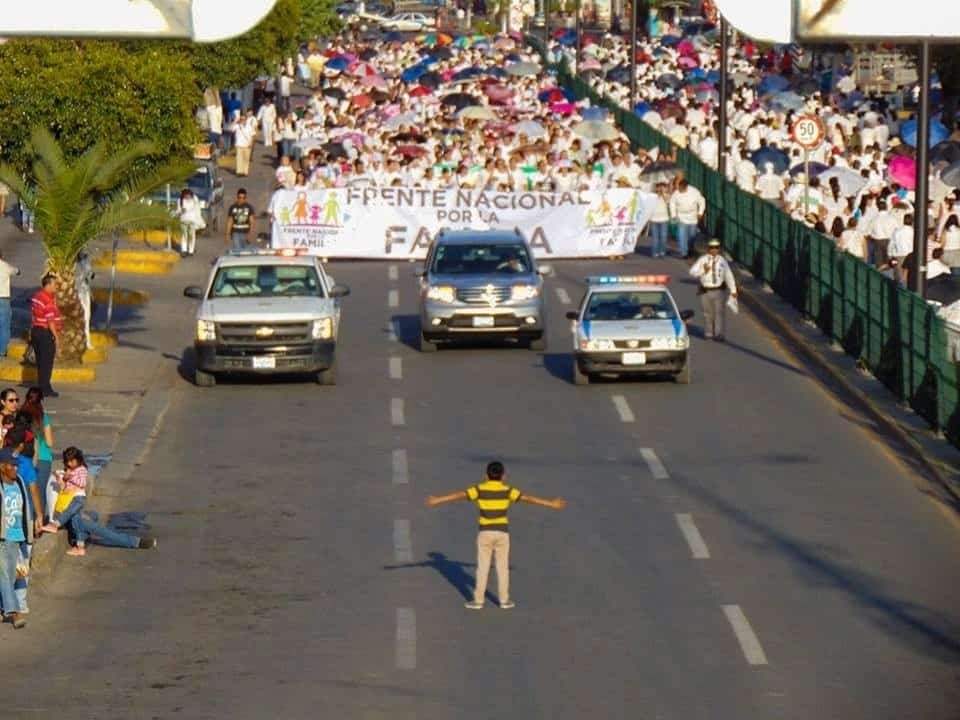 Across Mexico over the weekend, thousands of “pro-family” groups protested against same-sex marriage as the country moves toward marriage equality. In one particular march in Celaya, Guanajuato, a 12-year-old boy was photographed in the middle of the street trying to block the march of 11,000 people from moving forward.

Journalist Manuel Rodriguez captured an image that is instantly iconic.

As the publication Regeneracion noted, we’ve seen one very similar shot in Tiananmen Square in Beijing in 1989. It’s reminiscent of the “tank man” image the world knows so well.

Said Rodriguez to Generacion: “At first I thought the child was only playing.”

But Rodriguez interviewed the child later, who said, “I have an uncle who is gay and I hate the hatred.”

Thousands of opponents of same-sex marriage, including Tijuana’s new Roman Catholic archbishop, gathered for a rally in the city Saturday to protest Mexican President Enrique Peña Nieto’s proposed constitutional reform favoring the right of couples to marry regardless of gender identity or sexual orientation. The morning march to City Hall was one of dozens of such protests across Mexico that took place Saturday, drawing a combined hundreds of thousands of citizens. The demonstrations come on the heels of a series of legal victories scored by proponents of same-sex marriage in states across Mexico.

Video of the march in Celaya:

Previous Post: « Condragulations to RuPaul for Winning His First-Ever Emmy for Best Reality TV Host: WATCH
Next Post: Donald Trump Says He Had Physical and Will Release Results, Says He Hopes Hillary Clinton Gets Well: WATCH »