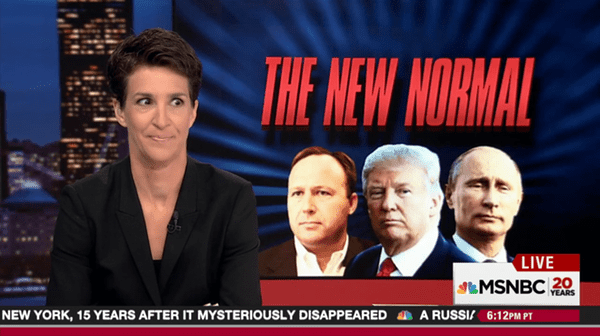 Jones and InfoWars have propagated a number of anti-gay conspiracy theories in recent years. Perhaps most heinously, Jones has said that the Orlando massacre was orchestrated by the LGBT community.

InfoWars has also said that President Obama is gay and had sex with former White House Chief of Staff Rahm Emmanuel, that Hillary Clinton is a lesbian, that Marco Rubio is obsessed with Donald Trump’s package, and that the government is trying to make more gay people by putting estrogen in kids’ juice boxes. 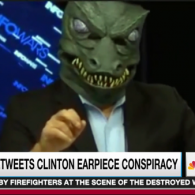 In case all of that wasn’t kooky enough, InfoWars frequently claims that “invisible alien lizard people drive most of US policy.” As Maddow explains, Jones frequently dresses up as an alien lizard person to prove this very point.

So while in any other election year Jones might just occupy a corner of the right-wing fringe, this year he has a prominent place front and center in Republican party politics.

“Alex Jones is no longer just broadcasting to your fillings and your molars. He is apparently what the upper echelons of the Republican presidential campaign is reading and citing and circulating, even at this late date in the campaign. And matters because it’s not just the kook fringe, it’s just not the sort of remunerative conspiracy theory world of that part of the conservative media machine. It’s not even just wacky people who have made their way into Republican politics at a surprising height. This is now the top of the Republican ticket. And it’s after Labor Day, and this is a presidential year. And so, all day today, after Donald Trump Jr. tweeted the Infowars Alex Jones conspiracy theory, all day today, this was the headline about the commander-in-chief forum at the mega-conservative news site that drives more traffic online than anything else on the right.”

That site being The Drudge Report which yesterday shared InfoWars’ conspiracy theory that Hillary Clinton was wearing an earpiece during NBC’s Commander in Chief Forum this week.

So while Hillary Clinton is “trying to conduct a campaign as if this is normal politics”, Donald Trump and the Republicans are “stuck on the juice boxes make you gay channel.”

[Editor’s note: an earlier version of this post ran with the headline ‘Rachel Maddow Explains How the ‘Captain of America’s Conspiracy Theory Mothership’ Went Mainstream – WATCH’]