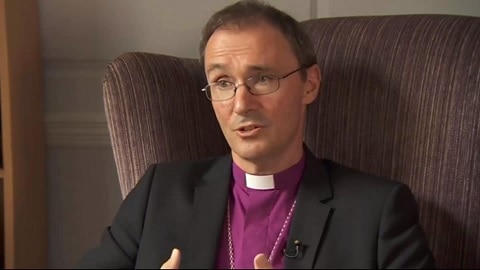 Prior to a meeting of the College of Bishops next Monday, 131 members of the Church of England’s ruling body – close to one third – have signed a letter urging the bishops to unequivocally welcome lesbian and gay Christians into the church.

At Monday’s meeting, Bishops will discuss what the church should do following two years of internal debate about sexuality. Last week, Nicholas Chamberlain (above) became the first bishop to openly declare he is gay and in a relationship.

Bishop Nicholas Chamberlain is incredibly brave! Good on him for going public! Those decrying him should be ashamed. #LGBT #CofE

The letter urges bishops to “help lead us forward” and to be “unequivocal in its acknowledgement that all, including those who identify as LGBTI, are essential to the health and future of our church and mission to the wider world”.

Lay synod member Jayne Ozanne, who helped organize the letter, told The Guardian the response had been overwhelming:

“It definitely seems that the tide is now finally turning. From conversations I have had it would appear that many synod members were deeply challenged and moved by the [internal] discussions in July, and it seems that there is a growing consensus for the church to take active steps towards ensuring it is welcoming and inclusive of all.”

Paul Bayes, the bishop of Liverpool, said “It was especially good to recognize the signatures of synod colleagues from many of the different traditions that make up our richly diverse church.”

Congratulations to Archbishop Justin Welby on appointment of Bishop Nicholas Chamberlain. Tho' an atheist I want a Church led with courage.

However, last month 72 conservatives warned Bishops against “any proposals that could leave the church ‘adrift from her apostolic inheritance’ and lead to an ‘unwanted fracture’ within the C of E and global Anglican church.”

A church spokesperson said that “deep convictions have been shared and profound differences better understood. That process will inform discussions at the meeting of the college of bishops and further meetings in the months ahead”.

No final decisions are expected to be made at next week’s meeting.

The conservative Anglican group Gafcon has said that appointing Chamberlain as Bishop of Grantham has placed “difficult stresses on a church which is hanging together by the skin of its teeth.”

Watch an interview with Chamberlain below.

Previous Post: « Will 3rd Time Be the Charm for Jacksonville’s LGBT-Inclusive Human Rights Ordinance?
Next Post: Rachel Maddow: The GOP is ‘Stuck on the Juice Boxes Make You Gay Channel’ – WATCH »