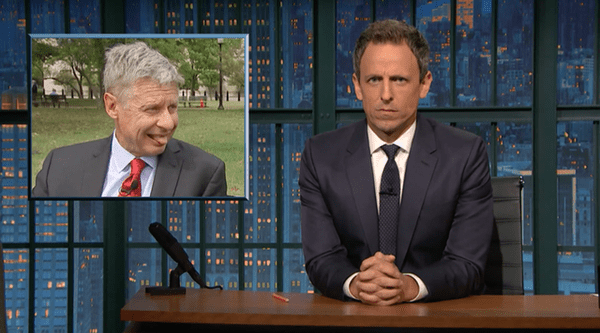 On Thursday, Seth Meyers took a closer look at this week’s political blunders.

Laying into Donald Trump’s debate performance, Meyers ripped Trump and his son Eric for suggesting it was courageous to not mention Bill Clinton’s extramarital affairs during the debate.

“Yes, how courageous,” Meyers quipped. “He didn’t attack Hillary for her husband’s affairs. What a hero. Someone should give Donald Trump a trophy. Oh, right. He already has one.” Meyers then showed an image of Donald with his wife Melania.

Just for fun, Meyers also reveled in how Hillary burned Trump for having humiliated and fat-shamed former Miss Universe Alicia Machado. Referring to Hillary’s line that Donald ‘likes to hang around beauty pageants,’ Meyers joked, “There’s really nothing creepier than a guy who hangs around beauty pageants.” 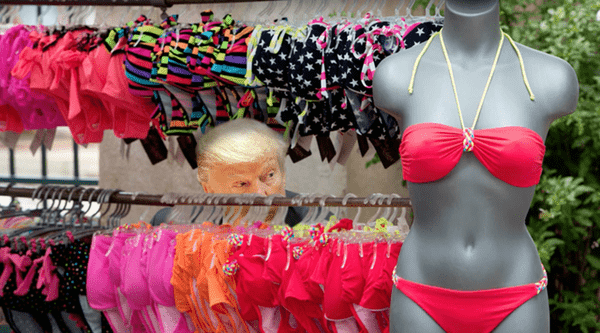 As for former DNC chairman Howard Dean’s suggestion that Donald Trump is a coke user, Meyers said, “Also you can’t call Donald Trump a coke head. If you do he’ll take it one step further. ‘Some people are saying Hillary and El Chapo are the same person.'”

Then there was Gary ‘What is Aleppo?’ Johnson. Meyers first referred to an interview Johnson did with MSNBC’s Kasie Hunt in which he bit his tongue while talking to make a point that all he would have to do is show up at a presidential debate to gain traction in national polls. Meyers joked, “Maybe next time, only eat half the brownie before you do an interview.” Johnson is an advocate for marijuana legalization.

Meyers also skewered Johnson for his disastrous performance in a town hall with MSNBC’s Chris Matthews. If you thought he would be more prepared to discuss foreign policy after failing to know that Aleppo is the center of the refugee crisis in Syria, you’d be wrong.

Meanwhile, Hillary Clinton is struggling to gain support from millennial voters, leaving many to wonder if Bernie Sanders could have done more to get them behind Clinton. But it’s not so simple, Meyers explained: “What’s everyone expecting of Bernie? He’ll take out his flute and the millennials will flock to his side?”