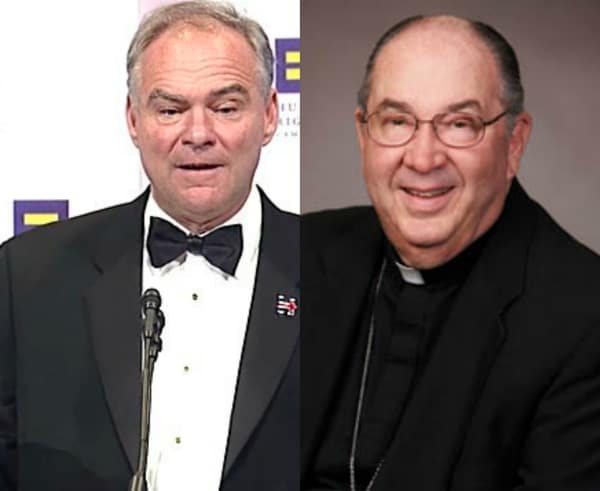 The bishop who presides over Democratic Vice Presidential nominee Tim Kaine’s diocese has responded to comments Kaine made on the campaign trail about gay marriage.

Kaine spoke at a Human Rights Campaign gala over the weekend, saying he believed the Catholic Church will eventually come out in favor of same-sex marriage.

“And I think [the church’s opposition to same-sex marriage is] going to change because my church also teaches me about a creator in the first chapter of Genesis, who surveyed the entire world, including mankind, and said, ‘It is very good. It is very good.’”

In a statement released on Tuesday, Bishop Francis X. DiLorenzo of the Diocese of Richmond said,

“More than a year after the U.S. Supreme Court’s ruling on marriage, and despite recent statements from the campaign trail, the Catholic Church’s 2000-year-old teaching to the truth about what constitutes marriage remains unchanged and resolute.”

He added, “Our understanding of marriage, however, is a matter of justice and fidelity to our Creator’s original design.”

DiLorenzo also called same-sex marriage a redefinition of marriage. “Redefining marriage furthers no one’s rights, least of all those of children, who should not purposely be deprived of the right to be nurtured and loved by a mother and a father,” he said.

Kaine’s commitment to the Catholic Church often comes at odds with his progressive politics. Abortion rights activists have often been skeptical of Kaine because he describes himself as personally opposed to abortion like his church but believes in a woman’s right to choose like his party.

Kaine’s Catholic faith and specifically his home church on Richmond’s Northside play prominently in his narrative as a candidate. He even mentioned his church in his first speech after Clinton announced she had selected him as her running mate and attended Mass there the following Sunday.

Like Clinton, Kaine has only relatively recently become an ardent supporter of same-sex marriage. He did not announce that he officially supported the legal rights of gay couples who wanted to marry until 2013.