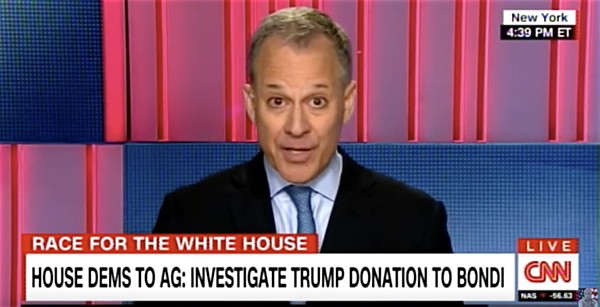 New York Attorney General Eric Schneiderman on Tuesday announced that his office had launched an investigation of the Trump Foundation, the New York Daily News reports:

The probe will focus on several topics related to the GOP nominee’s charity, including its 2013 $25,000 donation to the Florida Attorney General’s campaign after her office said it was considering legal action against Trump University. Charities are barred, under IRS, rules from making any political donations.

The probe will also focus on purchases the charity purportedly made for Trump, including a $20,000 portrait of the mogul. Such purchases are also against IRS rules for charities.

In a subsequent interview with CNN Tuesday night, Schneiderman, whose office is already overseeing a $40 million suit against Trump related to his shuttered scam school, said he was investigating the charity “to make sure it’s complying with the laws governing charities in New York.”

“We have been concerned that the Trump Foundation may have engaged in some impropriety from that point of view. And we’ve inquired into it and we’ve had correspondence with them. I didn’t make a big deal out of it or hold a press conference. But we have been looking into the Trump Foundation to make sure it’s complying with the laws governing charities in New York.”

In a letter sent to U.S. Attorney General Loretta Lynch on Tuesday, Democrats on the House Judiciary Committee pointed to a $25,000 donation that Trump’s charitable foundation improperly paid to a pro-Bondi group while her office was examining a lawsuit against Trump University. They noted that after the donation was received, Bondi declined to pursue a case against Trump’s controversial real estate seminar program or to join other states’ litigation. They also cited other donations in support of Bondi’s bid for re-election.

“This fact pattern indicates that these payments may have influenced Mrs. Bondi’s official decision not to participate in litigation against Mr. Trump,” wrote the Democrats, led by Rep. John Conyers (D-Mich.). “A number of criminal statutes would appear to be implicated by this course of conduct,” they argued, pointing to laws against bribery, public corruption and hiding charitable foundation payments from the Internal Revenue Service.

Clinton has commented on the contribution:

The Trump campaign has responded to both investigations, the Washington Post reports:

Hope Hicks, a spokeswoman for the Republican presidential candidate, said: “That is a totally ridiculous and false mischaracterization that blatantly disregards the facts. This is clearly a politically motivated attempt to distract from all of Hillary Clinton’s issues.”

Of the New York Attorney General’s announcement, Trump communications adviser Jason Miller said: “Attorney General Eric Schneiderman is a partisan hack who has turned a blind eye to the Clinton Foundation for years and has endorsed Hillary Clinton for President. This is nothing more than another left-wing hit job designed to distract from Crooked Hillary Clinton’s disastrous week.”

Previous Post: « Brian Justin Crum Delivers Dazzling Final ‘America’s Got Talent’ Performance of ‘Man in the Mirror’ – WATCH
Next Post: 53 GOP Lawmakers in Tennessee Have Nothing Better to Do Than Try to Intervene in a Gay Couple’s Divorce »