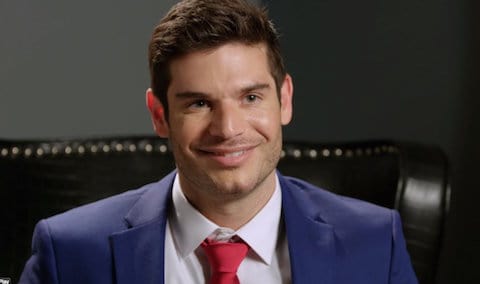 You know, I was watching the finale of this stellar season of RuPaul’s Drag Race All Stars, and I saw an ad for this show featuring a few posed photos of Robert, all toothy smile and granite-jawed, and I felt a tinge of something. Could it be this show was winning me over? Could I be getting a little excited for the recently greenlit second season? Was I, like so many of these walking Titan Men pop-up ads, actually falling for Robert?

Then I watched last night’s episode, and I thought “Nope!”

How forgettable is our titular Prince Charming? He’s so forgettable that tonight, when the top five guys are asked to recall anything he’s told them about himself over the course of the competition, they are dumbstruck. It’s literally a quiz on Robert’s personality, and they are holding up blank white dry erase boards. If there was a more perfect visual gag this year on television, I don’t know it.

Maybe these guys just work better as still photos. Perhaps next season should just be a series of Instagram photos. (Double-tapping Prince Charming at least sounds like it’s going to attempt to be contemporary.)

Speaking of double-tapping Prince Charming, last night’s episode featured two of the most boring threesomes I’ve seen outside of lesser Cam4 shows. Let’s discuss the dates, the dudes and the drama in our SPOILER-filled recap below. 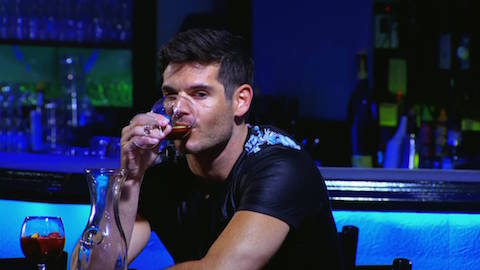 The guys return from the latest black tie affair, and it’s revealed that, apparently, Robby is dead. Died of a broken heart, I guess, because they are all in deep mourning. In his memory, they all promise to keep the house fun. It is both a wholly over-dramatic gesture (Robby is doing just FINE) and also completely outside any of their skill sets.

Local coyote Lance Bass wriggles his way through the doggy door to spring yet another pointless challenge on the guys. Lance will ask them a series of impossibly mundane questions about the impossibly bland Prince, and the impossibly shallow suitors will write their answers on $1.99 dry erase boards they sell at the front of Target stores.

So much of this show is embarrassing and uncomfortable, but this really took the cake (although it didn’t eat any of it, because, you know, carbs). Lance asks them about Robert’s middle name, his father’s name, his boyhood crush, things of that nature, and the guys are baffled. Their interest in Robert begins and ends at those abs, darling. Justin snags a few points by basically guessing answers, winning the solo date and the power to assign the boys to the other triple dates.

Justin heads with Robert to a local art gallery, where Justin is the first to confess he knows nothing about art. It’s a point he really drives home while looking at an abstract, black and white painting of a naked woman. He says he admires the “clean lines.” Oof. I’m no art historian, but I believe that’s what the art world calls “a reach.”

The absolute best part of the date is when the gallery owner (docent? receptionist? PA?) sets up two canvases and tells Robert and Justin to paint each other. It is every bit as excruciating as you would think. I mean, man, when it comes to shattering gay stereotypes, this show is GROUND-BREAKING, henny. Never again will people assume all gay guys are witty and artistically talented, let me tell you.

Of course, the real challenge is not to produce the best portrait of the other guy. No, no. The true task at hand is to convince the other guy that what he made isn’t completely heinous and killing your fragile self-image. I mean, you could see the beads of sweat dripping down their foreheads as they force themselves to say each other’s paintings aren’t “that bad.” I want a reality show that’s just gay guys with no artistic skills painting portraits of each other until everyone has a nervous breakdown from obsessing if they actually have cankles or not. It’ll be just like those Dove Real Beauty Sketches, except opposite in every way.

Justin had tried to draw a simple, semi-realistic portrait of Robert’s face, and the result would be mediocre by middle school art show standards. Robert opts instead to go a more abstract route, sketching Justin as some sort of Uma Thurman-as-pictured-by-Salvador Dalí monster, with the sun shining behind him because, um, he lights up a room? And then actual, honest-to-god happy and sad face because he’s always trying to help people or something. Good gracious. 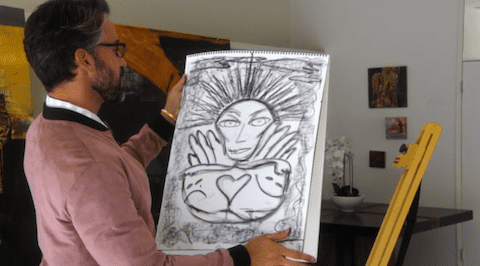 And yet? That’s the least annoying of the three dates we see. Eric and Brandon join Robert for a little self-defense training. Despite how sexy they keep saying it is to be tackling and straddling one another, I just don’t buy it. It’s the kind of gym that just looks like it smells like sweat and mold and high school bullies. That doesn’t stop them from giggling and woohoo-ing like a bunch of moms on too much chardonnay every time they make body contact.

While I am starting to warm to Brandon, each moment I spend with Eric makes me like him less. Now, I wouldn’t expect to see any of these dudes lining up for a MacArthur Genius Grant any time soon, but man does he seem particularly hollow. I’m not sure if it’s the fact he speaks in such a consistent monotone or if it’s how he’s always seemingly staring into middle distance, but whatever the cause, there just doesn’t seem to be a whole lot of there there.

At least the third date between Robert, Chad and Dillon has some excitement. They take dance lessons, and then hang out in a sad, completely empty club. Trying to make it look sexy with some extra candles or whatever just makes it look more unsettling. It looks like the kind of place Robert would paint a sad clown in an iron lung. It is bleak.

Chad struggles a bit with the dance moves. In the confessional Robert bravely shares that he’s “not a perfect dancer.” Robert’s attempt at humility are hilarious. Oh, you’re not a PERFECT dancer? That’s how you would describe yourself? Slow down there, Martha Graham.

Dillon does better on his feet and then steals Robert away for some one-on-one time. That leaves Chad to sit alone in a totally empty bar — like not even a bartender in sight — with a pitcher of sangria. Little by little, Chad starts to lose it.

Now, let me stop here, because I am obsessed with Chad. He looks like something Andy Serkis would portray via mo-cap in Fire Island of the Apes. His crazy has been bubbling on a low simmer since the beginning, often erupting in comically grotesque weeping at dramatic moments. It’s finally time for him to snap. He is sitting maybe 15 feet from Dillon and Robert and, in a confessional interview — shot long after the heat of the moment — he says, “god knows what they’re doing over there.” Well, for starters, you could just pivot your head and look, bro? But sure. The worry of what Robert and Dillon are up to sends him into a rage. He storms over to their table and announces he! is! leaving!

Robert follows him into this creepy hallway where there’s this persistent whirring, and it’s one hacksaw away from a scene out of the Saw franchise. It’s almost Ryan Murphy presents Finding Prince Charming, a show that I bet would show a lot more butts and I would much rather be watching.

Things are tense when the guys get back to the house. Dillon is sitting on Brandon’s bed recounting the awkward dance date as well as Chad’s breakdown when Chad bursts in the room in full Joan Crawford crazy mode. Chad demands Dillon get out of his room. Dillon — more of a savvy reality-TV player than a genuine romantic interest for Robert, IMHO — sees an opportunity to rile him up so, despite Brandon’s pleading to GTFO, chooses to make his stand by refusing to leave. The two of them are in the most annoying verbal slap-fight until sensible Brandon is able to convince Dillon to go to sleep.

Finally, at the black tie affair, Chad is ready for his big moment. He storms over to Robert, calls him a player and throws his tie on the ground at Robert’s feet. He’s been cheated on before, and now he thinks everything Robert says is disingenuous. Gurl. Come on. Robert is a player! THIS IS A GAME! Then Chad marches in the house, packs his suitcase and dramatically marches it out of the house through the middle of the black tie affair.

The theatrics don’t stop there. In his confessional interview, Chad first says “I feel like The Twilight Zone” which I’m not even going to bother trying to parse grammatical sense out of. Finally, he ends by trying to apply some grand life lessons to this whole experience: “You gotta look at the good.” Do you, Chad? Do you?

For me, that means looking toward the impending end of Robert’s search for love.

Who do you think is in the lead?

Previous Post: « South African Man Jailed For 17 Years For Burning Gay Man Alive
Next Post: Trump Tells Supporters Sex Accusers are Too Ugly for Him: ‘She Would Not Be My First Choice’ – WATCH »