LEMONADE. Eric Trump stole lemonade from In-N-Out. “Eric Trump holds a free, clear, plastic cup, which is supposed to be used for water.”

JUSTIN HARTLEY. The Smallville stud got soaked on Ellen. 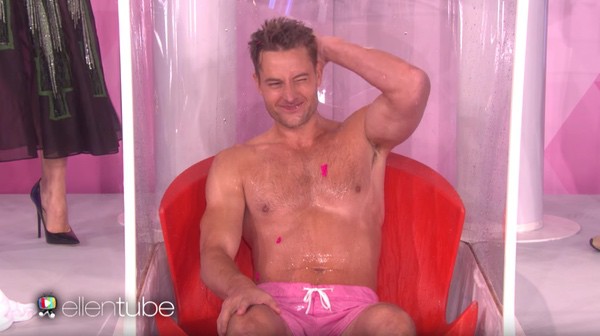 IT WASN’T JUST YOU. Yes, the internet did get attacked.

PROPAGANDA. Russia sought to monitor U.S. elections: “In an apparent move to embarrass the United States over Donald Trump’s claims of a “rigged” presidential election, Russia sought to send monitors to U.S. polling stations for the Nov. 8 vote, Russian media revealed Thursday. The bid was sharply rebuffed by the State Department, and one state election official threatened criminal action if Russian monitors showed up, according to state-controlled Izvestia daily and broadcaster RT.”

BEARDY. Jon Bernthal is looking bearish on the set of Punisher.

MYSTERY. Fin whale beached on east coast of Britain: “It should not be in those waters,” he told the BBC. “We see fin whales occasionally on the southern coast or more the west coast of the UK, so Ireland, right up to Scotland. But you never get them in the North Sea, so what it was doing there, we have no idea at the moment.”

Hopefully not a repeat saga like beached Sperm Whales earlier in the year.. #finwhale #Holkham pic.twitter.com/dOt3nIyWRh

HUGE. Massive prehistoric shark tooth unearthed by Hurricane Matthew. “We had been there maybe 15 minutes, standing in ankle deep water and all of a sudden I looked to my left and within two feet I saw this shark’s tooth, which I thought it was a shark’s tooth but I’ve never seen anything that large,” Campbell said. “My wife though it was a rock. And I reached over and picked it up and I saw the serrated edges so I knew then that it was a big shark’s tooth, but I had no idea it was a Megalodon.”

BERMUDA TRIANGLE. Has the mystery been solved? “’These types of hexagonal shapes in the ocean are in essence air bombs. They’re formed by what is called microbursts and they’re blasts of air.’ The blasts of air are so powerful, they can reach 170 mph — a hurricane-like force easily capable of sinking ships and downing planes.”

ARMREST WARS. A bold passenger reclaims what he believes is rightly his.