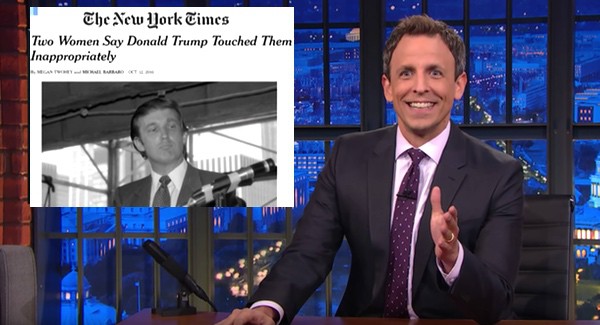 Seth Meyers took “a closer look” last night at the multiple sexual assault allegations launched against Donald Trump this week and the parade of figures coming to his defense with their weird logic.

First up was Trump campaign manager KellyAnne Conway who made the bizarre argument to Anderson Cooper that Hillary Clinton should actually have opened a far greater lead against Trump as the first female candidate.

Meyers then headed in for a look at the allegations themselves, concluding:

“Here’s the problem for Trump. There’s very good reason to believe he did what he’s accused of. Why? Because an irrefutable, inside source told us so: Donald Trump. Donald Trump is his own ‘Deep Throat’. He’s ‘creep throat.'”

Among those coming to Trump’s defense. Ben Carson, who told CNN’s Brianna Keilar that the problem was that she hadn’t heard enough of Trump’s so-called “locker room talk”. And Mike Huckabee, who compared Trump to Captain Quint, and Hillary Clinton to the shark in Jaws, despite the one very-flawed part of that argument: the shark ate Quint.

Finally, Meyers clapped back at Trump’s questioning why all these allegations are coming out now.

“When people ask why women wait to report sexual assault, that’s why, because instead of believing them, you question their motives. Stop pretending there’s an optimal time for women to go public with these kinds of allegations. It’s not like if you do it within the first 24 hours, you get a parade and an iTunes gift card.”