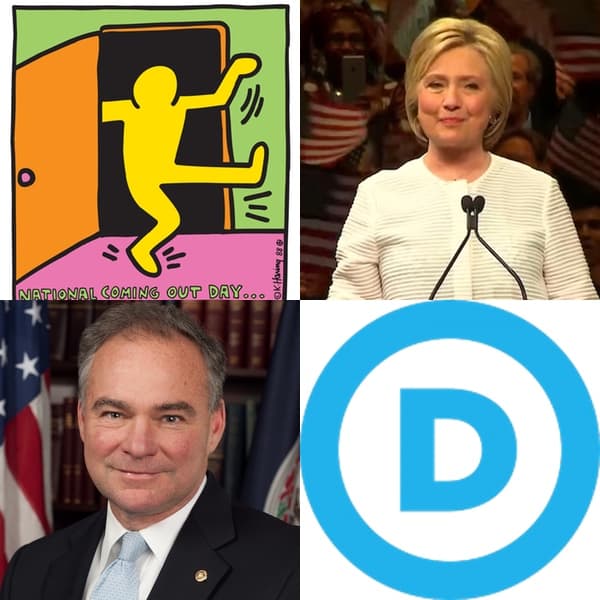 Clinton tweeted a message this afternoon that read “You have millions of allies who will always have your back. I am one of them.”

She added, in an appended note to her social media followers: “Coming out often takes incredible courage. On#NationalComingOutDay, let’s honor that courage by showing LGBT Americans we’re with them.”

Coming out often takes incredible courage. On #NationalComingOutDay, let's honor that courage by showing LGBT Americans we're with them. pic.twitter.com/LBhyK1Ounm

The Democratic National Committee also put out a press release. They write:

“Today, on National Coming Out Day, we celebrate one of the most powerful forces in the fight for LGBT equality. When someone decides to come out as member of the LGBT community, it gives their friends, family, loved ones and neighbors a personal reason to support LGBT rights, and it inspires more members and allies of the LGBT community to stand up for what is right, even in the face of discrimination, bigotry and violence. Despite the great strides we’ve made in recent years – marriage equality, the end of Don’t Ask, Don’t Tell and more – the sad fact remains that coming out is still a risky, even dangerous thing to do for too many Americans, young and old. But that’s why it’s so important. Together, we can end the discrimination and build a brighter, safer future for all.

“The Democratic Party is proud to stand with the LGBT community, and proud to support candidates for elected office who are fighting for the promise of full equality. If we hope to continue building on the progress of the last eight years, we must elect Hillary Clinton and Democrats up and down the ballot across the country.”

From the Clinton campaign:

Amid clips of LGBT kids describing the bullying and hate-speech directed at them, Senator Kaine says that National Coming Out Day is important because we need to let kids know that they should “be proud of who you are. You’re made the way you’re made for a reason…celebrate that and accept it.”

Senator Kaine also said that school districts receiving school safety funding should work to reduce the rate of bullying in their schools. As someone who has been standing up to bullies her whole life, Hillary Clinton, together with Tim Kaine, will continue fighting for the the LGBT community and celebrates National Coming Out Day.

Previous Post: « 7th Circuit to Reconsider Whether the Civil Rights Act Prohibits Anti-Gay Discrimination
Next Post: Chris Kluwe Unloads on Trump, Explains What Really Goes on in the Locker Room »