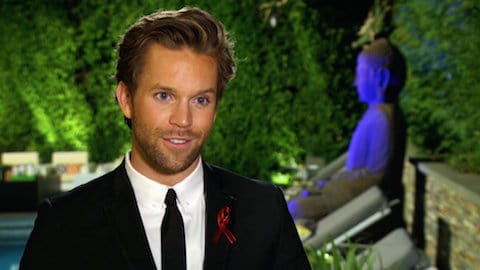 You guys, I think we need to have a discussion about what exactly constitutes a “ball.” Because if this week’s episode of Finding Prince Charming is any indication, I believe I have a very different definition than other folks out there.

Look, I love dancing uncomfortably in unfurnished dining rooms with six of my best Judys as much as the next guy, but I’d hardly consider that a ball. I barely consider that a party. I’ve been to Grease Live! viewing parties that were more lively.

In addition to the sad disco we all had to sit through, we’ve got a lot to unpack. It’s the week where everyone has to dig deep for feelings, and the results are mixed, at best!

Let’s mine for depth in the shallows of humanity for our recap, below. 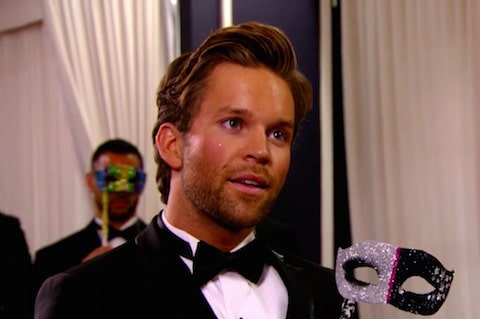 Coming off of last week’s elimination, the big story is how Robby needs to show his serious side, which baffles him as much as it does the rest of us. You’re perfect, Robby, don’t change a thing.

Eric notes early in the episode that with so many departed suitors, there’s a lot less personality in the house, and boy is that an understatement!

Lance Bass comes in to alert the boys that they’ll be “coming out again” by revealing their true selves at a masquerade ball later that evening. Get ready for some real, earnest, overwrought nonsense, you guys, but with glitter!

(As an aside, in my nightmares, Lance Bass bursts into my home each morning to give me some embarrassing corporate retreat icebreaker to do with a bunch of former Hollister models. This whole series is very triggering for me.)

Before they reveal their true selves (oh, brother) to Robert later that evening, they’re going to craft a custom mask that symbolizes who they really are or what they’re hiding or, I don’t know, honestly, even I’m losing this mask metaphor right now. Is the mask who they really are, or is the mask hiding who they are? What are you even talking about, Lance Bass? Do you know how masks work? Are you OK?

The boys get cracking, dusting their masks with glitter and feathers and good vibes, or whatever, and Eric is seriously shook by the experience. He brings Justin upstairs and reveals that his mask symbolizes that he is HIV-positive. He’s going to reveal his status to Robert and all the other guys at the ball later.

All the guys put on black tuxedos … and then head downstairs to the empty dining room … to dance uncomfortably with one another. It looks like a funeral in New Orleans. It looks like Logo presents a made-for-TV Eyes Wide Shut. It looks like the least fun party of all time.

Even Robby is in a mood. In his pursuit of showcasing his more serious side, he just comes off grumpy. Robert notices him slouching, but just can’t get over the idea that having a sense of humor isn’t necessarily a CONSPIRACY. Contrary to Robert’s suspicions, it is possible for functioning adults to actually have a personality.

Even in his slump Robby still manages to nail the best line of the night when Robert (totally, unprompted, unscripted and not at all like a robot) says “I want to know what your masks mean.” Robby just sort of rolls his eyes and, without missing a beat, says “Cue Lance Bass.” Perfection.

Like saying Beetlejuice three times (or the sound of a camera shutter within three miles of Frankie Grande), Lance Bass is summoned. The guys line up to one-by-one explain their masks to Robert. And it is rough. Most guys give some variation on the same story: I’m glittery and sparkly and fun and a walking Instagram thirst-trap on the outside, but inside, I have, like, feelings and struggles that are, like, really hard, you know? It’s painful to watch, actually.

Justin in particular feels pretty self-indulgent. He tries to one-up the guys with a mask behind a mask. It’s sort of like Roxxxy Andrews’ wig-under-a-wig, except about a million times less gratifying. Justin’s outermost mask is white and rainbow. It symbolizes how he is confident and full of pride on the outside, but inside he’s (*dramatic mask reveal*) got his challenges.

His inner mask is a black sparkly mask with, I kid you not, golden teardrops to show that sometimes he just cares TOO MUCH for other people, and it makes him vulnerable. Basically, he wants to Robert to know that he is such a good person, and it is such a burden to care so much! (I also hate the way he awkwardly forces the phrase “all that glitters isn’t gold” when he takes off the first mask. Come on, lady.)

Anyway, the big moment is built up for Eric to make his reveal to Robert, which he does last. It’s a big moment, and the show knows it, even taking a commercial break right before Eric steps up. His confession is met with overwhelming support from Robert and the rest of the guys. Robert even chooses him for the one-on-one date.

They hop in a limo and are whisked away to a romantic dinner. On the way, Robert shares the story of his uncle, whom he cared for while he died of AIDS in the ‘90s. At dinner, Eric is the most open he’s been, now that the wall has been taken down between them. As they head home, they share a steamy make-out session in the back of the limo, and I’m 90 percent sure I caught Eric’s hand on Robert’s junk. Go on, gurl.

As I’m often critical of this show, I will say that any opportunity to lessen the stigma around HIV is a good thing. The fact that he is still embraced by Robert and boys is great. Sure, maybe the masquerade/reveal set up and dramatic editing felt a touch exploitative, but that’s how things work on reality TV.

At the same time, I would hope in 2016 on a gay show on a gay network, we’re not just patting ourselves on the back, because Eric wasn’t chased out of the house with pitchforks and torches. There’s a much more nuanced exploration of HIV and dating in the gay community to be had, but that’s not for this show, and I’m OK with that.

The next day Robert comes by for a pool party (ugh, another pool party?). Eric is perplexed that his new husband Robert is still dating five other people, so he’s sad every time Robert steps away with another guy. Meanwhile, Chad wants to show Robert the mask he made for him, which was inspired by a Phoenix because it’s “ignited by fire” (what?) and Robert ignites a fire in him (oof). Am I the only one that gets a creepy vibe from Chad? Like wear-your-skin creepy? He reminds me of a cro-magnon Talented Mr. Ripley. (Though I live for his ugly cry every. single. time.) 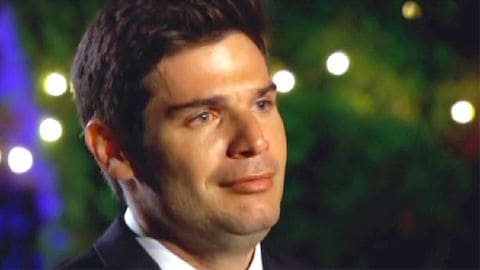 Brandon snatches Robert away to suggest that he was “unavailable” the night before. Maybe he means that they all revealed secrets to him, but he kept his secrets to himself. Whatever the case, they agree that will get each other’s attention more (or something) and then start doing this weird Cirque du Soleil kissing that involves a lot of backbends and jockeying for position. It’s uncomfortable to watch, and probably uncomfortable for them, too, unless they had a chance to stretch properly beforehand.

Justin makes the puzzling decision to tell Robert that maybe he doesn’t want to get between Robert and his new best friend Eric. Huh? Is he trying to take himself out of the competition? How could he possibly jeopardize the budding romance he’s got with a guy he just met just to save the budding friendship he has with a different near-stranger? Oh, Justin, you are so brave putting everyone else’s feelings first. Classic Justin.

The black tie affair comes along, and it’s down to Justin and Robby (even though Dillon wears a hideous denim jacket that should have disqualified him immediately, sorry). To the surprise of absolutely no one, Robert sends Robby packing, leaving a massive void in this cast of characters. Personally, I think Robby’s better off.

What did you think of this episode?