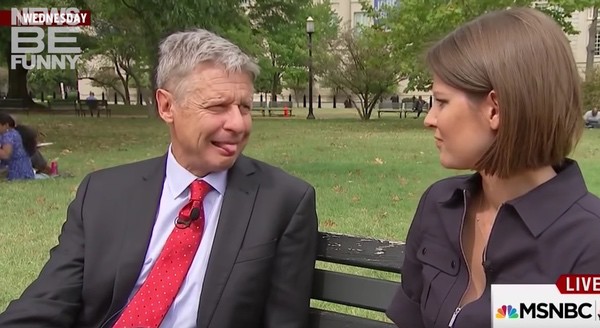 News Be Funny compiles the funniest news clips and bloopers each month and September 2016 had to be one of the crazier months of the year, given the political moment we’re in.

Not only did Libertarian presidential candidate Gary Johnson reveal his brain is completely empty of knowledge on foreign events, he also assaulted an MSNBC reporter with his tongue.

But that’s not all: Hillary Clinton’s death, Ben Carson’s luggage, a Colin Powell heckler all figure big in this round-up, along with bad parking meter math, alligator wrestling, errant marching bands, an overaffectionate giraffe, a warning not to wear clown shoes while driving, a man who lived among goats, and a really odd performance by Corey Feldman.