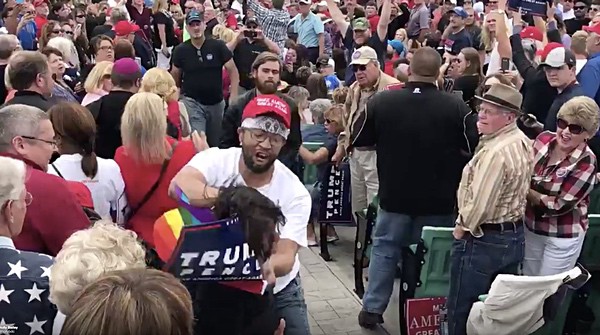 A man wearing a ‘Gays for Trump’ t-shirt and a Human Rights Campaign sticker on his ‘Make America Great Again’ cap and holding a rainbow flag in one hand attacked a protester at Donald Trump’s rally in Greensboro, North Carolina yesterday. The protester was holding an American flag upside down.

The altercation, just the latest incident of violence against protesters at Trump rallies, came moments after Trump pointed directly at the protester and told him to “get out!”

…As the two men scrapped, a police officer intervened to break up the scuffle and escorted the protester out of the venue.

Asked by CNN why he hit the protester, the Trump supporter simply said “I didn’t hit him” as police pushed him toward the exit, arms behind his back.

Trump did not denounce the violence, but instead attacked the protester:

Yesterday we published an interview of a gay couple supporting Trump at a rally in Ohio. It’s unclear what percentage of the gay population supports Trump, or why.

Protester at @realDonaldTrump rally shoved, put in a headlock by Trump supporters. Here's what followed: pic.twitter.com/kqM5sn7eQR

It’s unclear if either person was arrested.

Unfortunately, Trump’s supporters don’t realize that Trump himself is a far greater disgrace to this country than any flag-holding protest could be.