Mike Pence Calls Trump's Threats To Jail Hillary 'One Of The Better Moments' Of The Debate: WATCH - Towleroad Gay News 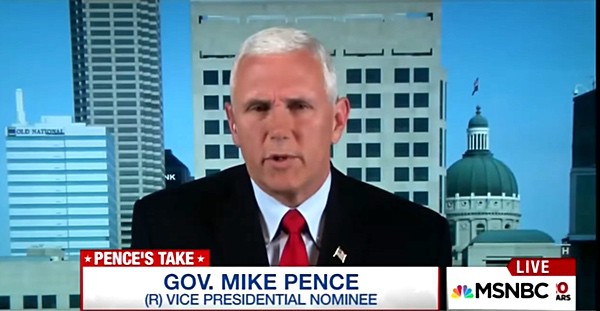 In case you missed it, here’s what Trump said to Clinton last night:

So we’re going to get a special prosecutor, and we’re going to look into it, because you know what? People have been — their lives have been destroyed for doing one-fifth of what you’ve done. And it’s a disgrace. And honestly, you ought to be ashamed of yourself.

This is everything we feared about Donald Trump. His long history of trying to silence critics with lawsuits, his inability to let personal slights go, his pettiness: The nightmare scenario is that these would incline him to use the power of the presidency to forcibly silence his critics and opponents. That’s what is done by tin-pot dictators spanning the globe from North Korea to Zimbabwe. That’s what happens in countries where peaceful transitions of power are the exception, not the rule.

Donald Trump just threatened to bring that to America.

In the USA we do not threaten to jail political opponents. @realDonaldTrump said he would. He is promising to abuse the power of the office

But Mike Pence? He thinks Trump’s threats were “one of the better moments of the debate.”

Previous Post: « John Oliver Rips Republicans Trying to Jump Ship on Trump: ‘This Is On You Too!’ – WATCH
Next Post: Warren Beatty Speaks About Transgender Son for First Time: ‘He’s My Hero’ »