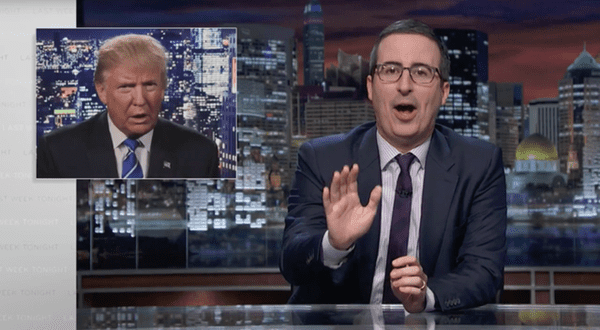 Referring to Trump’s ‘apology’ posted on Facebook over the weekend, Oliver said,

First, he claims he’s never said he’s a perfect person—which, of course, is a lie.Then he said he never pretended to be someone he’s not right before claiming ‘these words don’t reflect who I am’—which is absolutely absurd. They could not capture his essence more if they were spoken by a spray-tanned Furby eating KFC and screaming at a Gold Star family.

Oliver skewered Republicans who responded to Trump’s comments by saying they couldn’t tolerate their nominee’s words because they themselves are husbands, brothers, and sons to women.

As the son of a mother and a husband of a wife — what the f*ck does that have to do with anything? You’re going through an elaborate six-degrees-of-separation exercise to arrive at someone with a Y-chromosome that you can feel sorry for.

Oliver also special attention to John McCain’s first attempt at denouncing Trump’s comments in which he said, “[Trump] alone bears the the burden of his conduct and alone should suffer the consequences.”

“Except no, he alone does not bear the burden of his conduct, because he alone did not make himself your party’s nominee,” Oliver responded.

“All of you still thought he should be president. So the only way you get to be shocked and outraged now is if you were cryogenically frozen until Friday afternoon and that Access Hollywood tape was the first thing you saw upon being reanimated. Anything less than that, and this is on you too.”