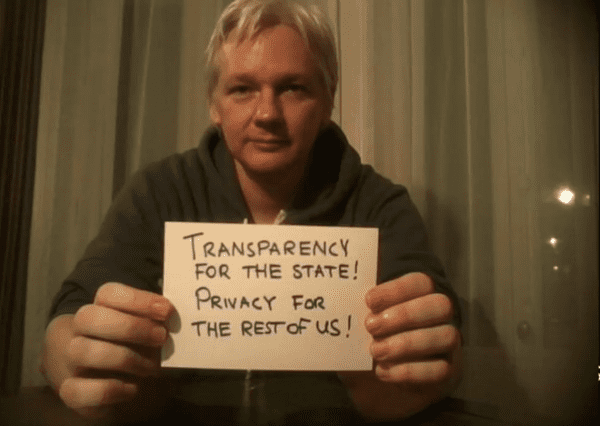 Assange has been holed up at the Ecuadorian Embassy in London for over four years to avoid being extradited to Sweden on charges of sex crimes.

WikiLeaks tweeted out on Monday, “Julian Assange’s internet link has been intentionally severed by a state party. We have activated the appropriate contingency plans.”

It is not clear at this time what those contingency plans consist of.

Julian Assange's internet link has been intentionally severed by a state party. We have activated the appropriate contingency plans.

Other WikiLeaks members have reportedly experience communications outages as well.

The news regarding Assange’s internet comes on the same day that Russian media outlet Russia Today’s UK bank accounts have been closed. Via The Guardian:

Russia has angrily accused Britain of trampling on freedom of speech after NatWest said it was closing down the bank accounts of the Kremlin TV channel Russia Today (RT).

Simonyan said she had received a letter out of the blue from NatWest saying that it was pulling the plug on the broadcaster’s accounts from mid-December.

Earlier, there had been speculation that a series of cryptic tweets sent out by WikiLeaks indicated that Assange had died.

In the absence of context, some users on Twitter, Reddit, and various image boards were quick to speculate that the tweets were the result of a “dead man’s switch,” triggered in the event of Julian Assange’s untimely end. Such switches do exist (both mechanically and electronically) and many speculated that all 349 gigs of the heavily-encrypted “Wikileaks insurance” from 2013 are intended for precisely that purpose.

However, later tweets by WikiLeaks volunteer Kelly Kolisnik confirmed that Assange is alive.

Meanwhile, a mysterious video has surfaced alleging Assange has left the Ecuadorian embassy and is as of this posting in a blue van just outside the compound.

Whoa, whoa, whoa. Let's not point fingers at things just yet. I have no reason or proof to believe that #Assange was in the G4S van.

UPDATE. WikiLeaks says Assange’s internet was cut off by the Ecuadorian government.