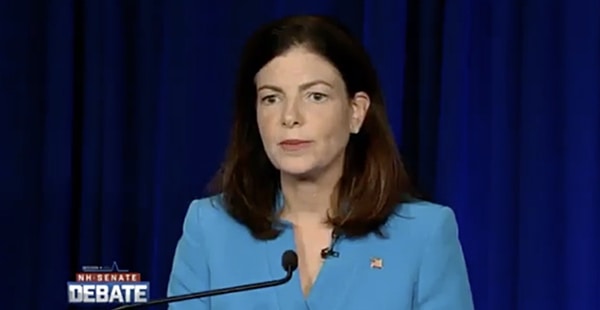 U.S. Senator Kelly Ayotte (R-NH) got caught in a web of her own words last night, proclaiming Donald Trump a “role model” for children and then being asked to explain why she won’t endorse him.

“Because I’ve had some disagreements with him…” she added, looking lost in her debate against the state’s Democratic governor Maggie Hassan.

Trump just spent a week fat-shaming a woman and bragging about not paying taxes; Kelly Ayotte calls him a role model pic.twitter.com/jrhwlo9bBe

She later released a statement.

“I misspoke tonight. While I would hope all of our children would aspire to be president, neither Donald Trump nor Hillary Clinton have set a good example, and I wouldn’t hold up either of them as role models for my kids.”

My statement on tonight's debate: pic.twitter.com/BxNE0NQn6m

As one of a handful of Republican senators running for re-election in states that voted for President Obama in both 2008 and 2012, Ms. Ayotte is considered particularly vulnerable this year. The contest between her and Ms. Hassan is one of the nation’s tightest Senate races.