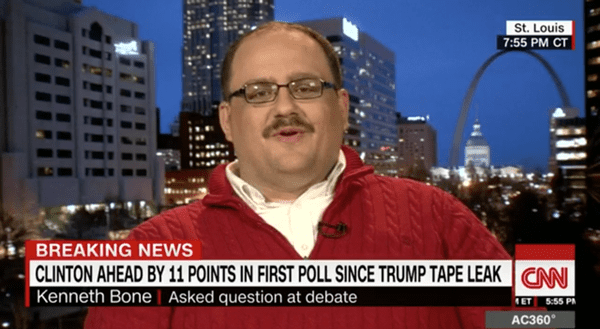 On Monday night, presidential debate viral sensation Ken Bone revealed that he is an advocate of marriage equality.

Bone rose to celebrity status after he was one of the undecided voters called upon to ask a question of Hillary Clinton and Donald Trump during the second presidential debate.

Bone’s question (about energy policy), his demeanor (affable as all get out), his wardrobe (a jolly red half-zip cable knit sweater with a white button up and white tie), and his disposable camera (#nostalgia), made him an instant Twitter sweetheart. He was even declared by many to be the true winner of the debate.

Anderson Cooper, who co-moderated Sunday’s debate, had Bone on his show AC 360 to talk about his meteoric rise to stardom, his famous outfit, and whether the debate helped him suss out who he will vote for.

Bone told Cooper that he had planned to wear a different outfit but it ripped as he was leaving for the debate. That led him to go with his ‘Plan B’ option, the now famous red sweater.

As for who he will vote for, Bone said he is more uncommitted than he was before the debate. Bone suggested that while Donald Trump might do more to benefit him financially, he worries Trump will appoint Supreme Court justices that would overturn the Court’s ruling on same-sex marriage.

“Donald Trump, he might have my economic interests more in my mind, just from a personal level. He will help my coal-fired power industry probably more than Secretary Clinton and give me a lot of future for my wallet and my ability to take care of my family.

But on the other hand, if he’s allowed to appoint the next Supreme Court nominee, there’s a very good chance that we could lose some of the rights that we’ve fought for for the last eight years, rights that all Americans should share, like marriage equality. And I do not want see anyone’s rights taken away.

So that’s what makes it difficult for me. It’s–we’re looking at a personal interest versus community interest election.”

"If you want to dress as me for Halloween, you better be quick: this sweater is sold out on Amazon" Ken Bone https://t.co/KLeJEWBgIz

Bone reiterated his support for marriage equality in an interview with Jimmy Kimmel.

“I would really hate for anyone’s rights to be taken back,” Bone told the late night host. “We fought so hard to get marriage equality and to get rights expanded to more Americans and I couldn’t–it would be unconscionable for me to see those taken away by a Supreme Court justice appointed by Donald Trump.”