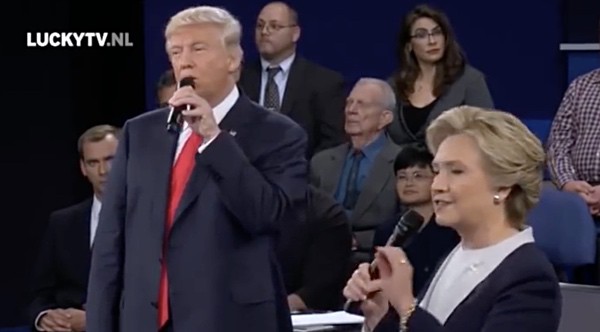 A meme hit the web once the debate ended that featured stills of Donald Trump and Hillary Clinton speaking into their mics at the same time, while people imagined they were singing duets together rather than arguing about ISIS, health care, or, in Trump’s case, slinging petulant insults.

"Islands in the stream…"
"…that is what we are." pic.twitter.com/JrnCjfsdlV

This picture is hilarious if you imagine them singing "Baby, It's Cold Outside" pic.twitter.com/QZPEs6uVC8

One contained the lyrics for “Time of My Life”, the song recorded by Bill Medley and Jennifer Warnes and used in the film Dirty Dancing.

And someone at LuckyTV took that meme and ran with it, to the benefit of all of us.

If only the debate wasn’t so dirty.

Nobody puts Hillary in a corner.